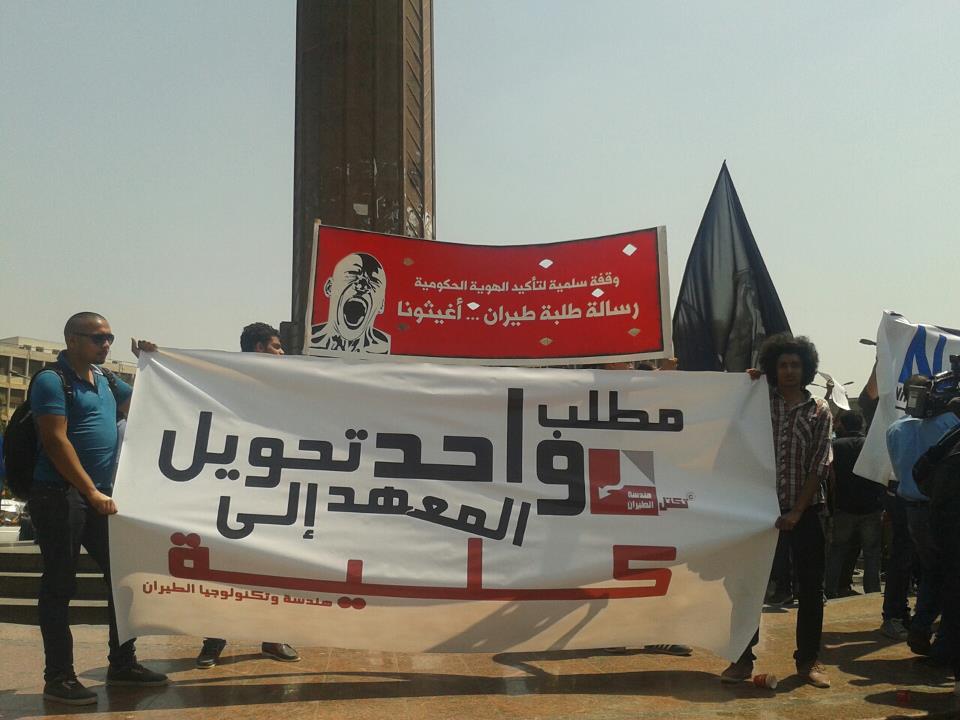 Hundreds of students marched on Saturday from Cairo University to the Ministry of Higher Education, chanting against the government and making various demands.

Students from several universities and student groups gathered at the main gate of Cairo University, where they held flags and signs and chanted against President Mohamed Morsi, the cabinet, the Muslim Brotherhood, and the minister of higher education. “Free students continue the revolution’s journey” and “Is this a university or a coffin? Are we here to study or to die?” were among the most repeated chants.

The students said that they would fight for the demands made by different student groups at the protest. “We won’t abandon other students if our demands are met,” said Omar Rezq, a representative of the Nile University student union.

Rezq said the government is refusing to enforce a court verdict allowing students access to buildings and facilities at Nile University.

In November 2012 a court verdict settled a dispute between Zuwail City for Science and Technology and Nile University and ordered that university buildings should be returned to Nile University. “Ahmed Zuwail and the government appealed the verdict, but it should be implemented unless the court rules on the appeal,” explained Rezq.

Ahmed Adel, a student of engineering at Imbaba Aviation Academy, said he is protesting over the delay in implementing a decision taken by Mosaad to transfer the administration of the academy from the ministry of civil aviation to the ministry of higher education. He explained that classes have been suspended since February, pending the implementation of the ministerial decision.

Adel added that a delegation of students went to meet Mosaad to discuss the situation. He claimed that they were beaten and arrested at the ministry on charges of attempting to torch the building.

Mahmoud Zika, a member of the Ahrar movement, said that only two members of the movement were released out of the 24 arrested during the protest held at Mansoura University, demanding justice for the student run over on campus by a professor. “They did not attack anyone and they were injured, but still they were arrested and attacked by thugs with birdshot and knives,” claimed Zika.