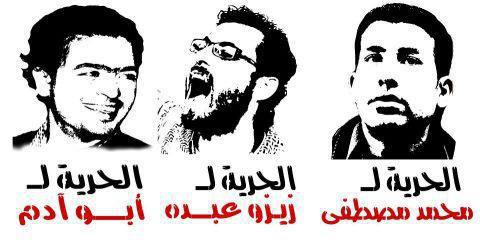 Three members of the 6 April Youth Movement are being held in Al-Aqrab High Security Prison. A fourth person, not a member of the movement, is also being held at the prison. There are fears that the four men could be at risk of torture and other forms of mistreatment.

Mohamed Mostafa Youssef, Mamdouh Hassan Mamdouh, Abdelazeem Abdo (members of the youth movement) and Said Mounir were arrested on 29 March in Nasr City during a protest outside the Minister of Interior Mohamed Ibrahim’s house. The group threw ladies undergarments at the house and accused the ministry of being a “prostitute for all regimes”. Mounir attended the protest in solidarity with the movement, said 6 April media director Khaled El-Masry.

According to an Amnesty International statement published on Friday, the detainees were held in the Central Security Forces camp in Al-Gabal Al-Ahmar, “an unofficial place of detention”. The men were then moved to Tora Prison, and since 6 April the men have been held in Al-Aqrab.

Malek Adly, a lawyer at the Egyptian Centre for Economic and Social Rights said: “There is nothing in Egyptian law preventing the Interior Ministry from sending people to any prison it chooses.” Adly confirmed that Al-Aqrab Prison is a high security facility and is meant for “dangerous criminals”. He added: “There are concerns that activists sent to such prisons are in danger of being harmed. It is a form of psychological torture.”

The Amnesty statement expressed concern for the wellbeing of the men and that the prisoners “are detained solely for peacefully exercising their right to freedom of expression and assembly”.

El-Masry said: “The government wants to appear to the international community that it respects human rights.” He added that the group hopes the Amnesty International statement will put pressure on the government.

El-Masry said that the four men had started a hunger strike in prison to demand better treatment but have since abandoned the strike. On the outside, 40 members of the group began a hunger strike on Thursday. El-Masry reported that other people from outside the movement have also joined the hunger strike and many have presented themselves at police stations to officially declare their strike.

The protestors are expected to continue their hunger strike until an appeal hearing on Monday, and depending on the verdict they will decide whether or not to continue.