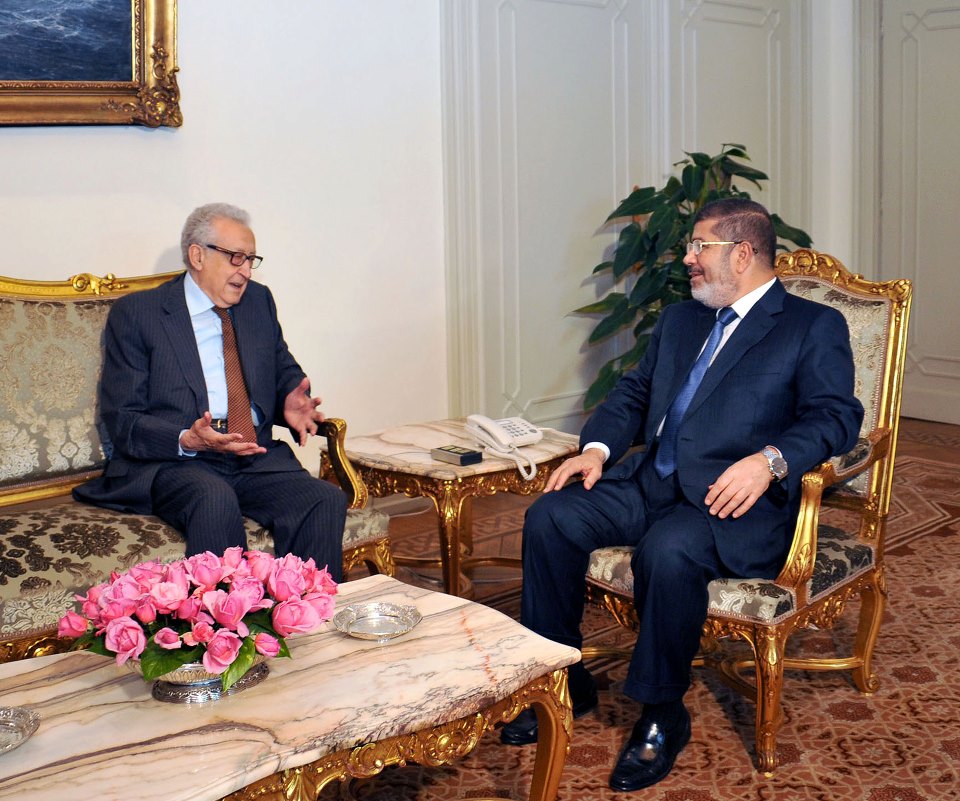 President Mohamed Morsi met with United Nations and Arab League Special Envoy Lakhdar Brahimi on Sunday to discuss the latest developments in the Syrian civil war. According to a press release from the presidency, Brahimi informed Morsi of the efforts being undertaken to achieve a peaceful solution to the war, which has left tens of thousands of people dead.

Brahimi gave Morsi his assessment of the prospects for a peaceful solution and informed him of the current regional and international efforts to stop the bloodshed. He stressed the need for integration and coordination between the various initiatives in order for them to work towards a constructive solution.

According to the statement, Brahimi also told Morsi it is paramount that the Syrian National Coalition and the Syrian opposition maintain cohesion, adding that the international community must support the coalition and tailor their efforts towards that end.

The President meanwhile praised Brahimi for his work and reiterated Egypt’s support of Brahimi’s efforts in Syria.

Morsi also said that achieving a breakthrough in Syria “requires a beginning and there is a regional and international desire to move swiftly towards a solution”. According to the statement, he also said that the United Nations’ Security Council has a responsibility to preserve the unity of Syrian territory and provide for an orderly transition of power removed from military options.

Morsi also highlighted the efforts made by the Syrian Quartet, initiated in 2012 by the president and comprised of Iran, Turkey, Egypt and Saudi Arabia. The statement said Brahimi commended the proposals set forth by Egypt and said that serious negotiations between the Syrian regime and the opposition must take place immediately.

Morsi concluded the meeting with Brahimi by saying the Syrian issue will continue to be one of the highest priorities in Egypt’s foreign policy, and will continue to coordinate and consult with world leaders in order to discuss steps to be taken in the future.

The United Nations Security Council will address the Syrian crisis on Thursday, and Lakhdar Brahimi is expected to deliver a report on the current situation.

Sources close to Brahimi said he would like to see the Egyptian Quartet initiative revived and he is still working hard to bring all parties back to the Geneva agreement signed last year. Brahimi is also said to want all parties and countries involved to support the tasks he has undertaken to ensure that a solution can be reached to end the crisis.