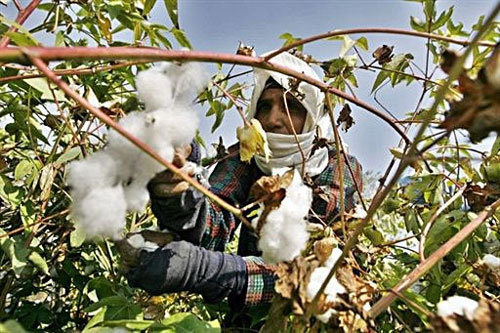 Egypt’s cotton exports fell by 40.6% in the first quarter of the agricultural season September-November 2012, according to a report released by the Central Agency for Public Mobilisation and Statistics (CAPMAS).

From November to December of last year, the price of cotton per pound decreased by 3% reaching $0.83.

The country’s official statistical agency attributed the decline to the rise in the global price of cotton.

The report also revealed that the amount of local cotton bought in the period September-November of last year increased by 326%, recording 4,158,000 metric quintals compared with the corresponding quarter a year before.

The Egyptian cotton industry, described by some as the world’s finest, has been in a state of decline for the past 20 years.

However Ahmed Ayyad, head of the cotton division of the Chamber of Commerce, stated in a conference that the government has made a deal to export Egyptian cotton to more than 50 countries.

The decision comes as an attempt to resume cotton production after two decades of decline.