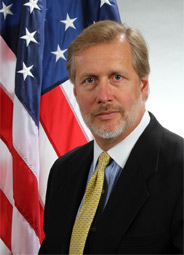 Hyatt is visiting Cairo as the head of a delegation of businessmen representing the information technology, construction, renewable energy and security sectors.

“The Egyptian economy is moving faster towards recovery from the current economic crisis, of which the international business community is aware, as Egypt received last week delegations from South Korea and today [Monday] one from the US,” said Hegazy, according to a Finance Ministry press release.

“The American delegation seeks to increase their investments in the Egyptian market which still attracts investment due to the Egyptian economy’s strength and its diversity,” Hegazy said.

“These visits are a good indicator for the Egyptian economy’s future and there are opportunities that lie ahead for stabilising the situation,” he continued

According to the press release, Hyatt and the rest of the American delegation showed interest in participating in Public-Private Partnership (PPP) projects.

“Many delegations are interested in the investment programme of Egypt’s ambitious partnership with the private sector,” Hegazy added, commenting on the PPP initiatives. “These include a number of investment opportunities for all economic sectors and activities, and the expected investments from these partnerships should exceed EGP 20bn.”

“The minister of finance asked the delegation to start pursuing a free trade agreement,” said Magdy Toulba, a member of the US Egypt Business Council. “The council’s role in the short term is to change the current stereotype of Egyptian businessmen for American companies, as recently they [American companies] have taken a very negative impression about Egyptian companies and businessmen,” Toulba explained.

“For the long term, the council will work to attract more investors to enter the Egyptian market.”

“Most of these talks are just periodic discussions more concerned about cooperation but it’s not their role either to decide about a new trade zone or increasing Egyptian exports to the US,” he added. “If we have a stable political and economic environment, good performance, and effective costs, the exports will directly be increased and the investors will be more interested in the Egyptian market.”

Atter Hannoura, director of the PPP Central Unit, said: “The projects are offered for international bidding, and there are no direct agreements with any specific investors. The Egyptian government welcomes all kinds of international investments to enter the market, and we also seek to promote our projects on an international basis.”

“The better the marketing, the greater the competition,” Hannoura added. “This will, in turn, benefit the Egyptian economy. The most qualified company regardless of its nationality will win the tender.”