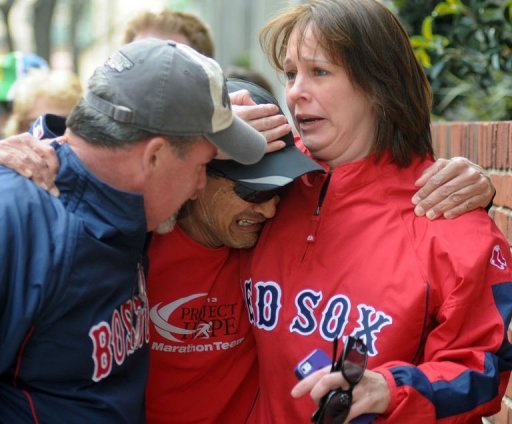 (AFP) — At least two people were killed and 23 others wounded when two explosions struck near the finish line of the Boston Marathon on Monday, sparking scenes of panic, police said.

Police did not immediately say whether the explosions were part of a terrorist attack, but marathon organizers said it was a twin bombing and media outlets reported that other unexploded devices had been found nearby.

The blasts left the streets littered with blood and debris, as paramedics raced off with stretchers and police locked down the area, according to witnesses, one of whom saw a man with his lower limbs blown off.

Boston police confirmed the toll of dead and wounded on its Twitter feed.

“There were two bombs that exploded near the finish line in today’s Boston Marathon,” race organizers said on the event’s Facebook page, without providing a source for the information.

“We are working with law enforcement to understand what exactly has happened,” it said.

A video clip posted online showed an explosion going off, apparently several feet back from the barricades and the line of national flags separating the race spectators and the street.

One runner is seen staggering and then falling, while others kept going for a few more steps. Volunteers in yellow jackets covered their ears at the sound of the blast.

“We saw people with their legs blown off,” Mark Hagopian, owner of the Charlesmark Hotel, told AFP from the basement of a restaurant where he had sought shelter.

“A person next to me had his legs blown off at the knee — he was still alive.”

“It was bad, it was fast,” he said. “There was a gigantic explosion… we felt wind on our faces… Police were saying: ‘Get out, get out, leave, leave there may be more bombs.'”

Zara Bielkus, a 30-year-old spectator from Boston, said she heard two explosions seconds apart. Police then locked down the area.

“When we heard them, everyone looked at each other and went very quiet, and within a minute police came,” she said.

Local media reported a third explosion nearby, but cited police as saying it was a controlled detonation.

US President Barack Obama was notified about the incident, and his administration was in contact with state and local authorities, a White House official said.

Obama called Boston mayor Tom Menino and Massachusetts Governor Deval Patrick to express his concern for the injured and to offer support.

Security was stepped up in New York and Washington, sites of the 9/11 attacks. In the Big Apple, police said they were boosting security at hotels and “other prominent locations in the city.”

The blasts in Boston rattled US markets, sending the Dow and the S&P 500 down at the close.

“Praying for those at the Boston Marathon today,” said one of the US senators from Massachusetts, Elizabeth Warren.

The Boston Marathon is one of the biggest annual athletic events held in the United States, with nearly 27,000 racers who must qualify to compete and tens of thousands of spectators.

The race attracts world-class athletes, most of whom would have likely completed the race a couple hours before the blast went off. The video clip of the blast showed the marathon timeclock at 4:09:44