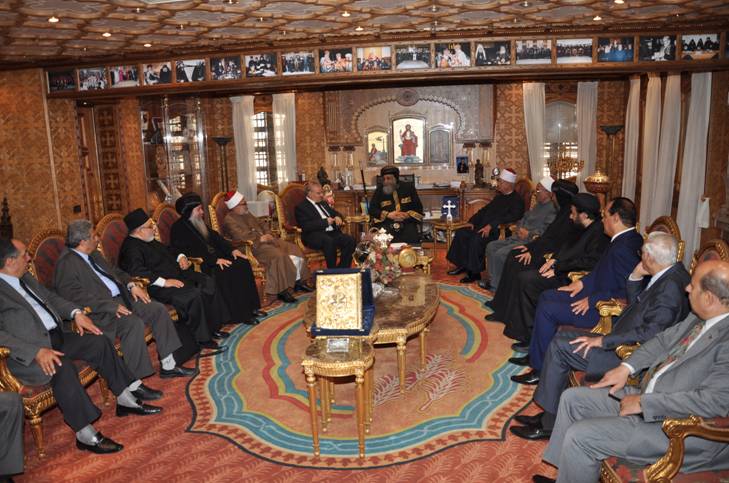 The group from Al-Azhar was led by Mahmoud Azab, advisor to Grand Imam Ahmed Al-Tayeb, according to state-owned Al-Ahram.

In an interview on satellite channel ONTV last week, the pope said that Al-Tayeb was the first person to call him last Sunday when violence erupted at the cathedral.

At the cathedral on Monday, the pope received families of those who died in sectarian clashes in the town of Al-Khasous, but for security reasons postponed opening the cathedral to the public to pay their respects, which was originally scheduled for Tuesday.

Family members of the Christian man alleged to have helped spark violence in Al-Khasous turned themselves into police on Monday. The public prosecution ordered 4 day detentions for the men, pending investigations.

The Maspero Youth Union on Monday called for a Friday march to leave Dawaran Shubra at 3pm and head to the Shura Council. In the Coptic rights’ group’s statement, it said it rejected “reconciliation meetings” which are typically conducted following sectarian attacks.

The group also rejected the detention of “Coptic activists” arrested as a result of the turmoil at the cathedral. The group called for trials for those responsible for those involved in the violence in Al-Khasous and rejected the practice of collective punishment.