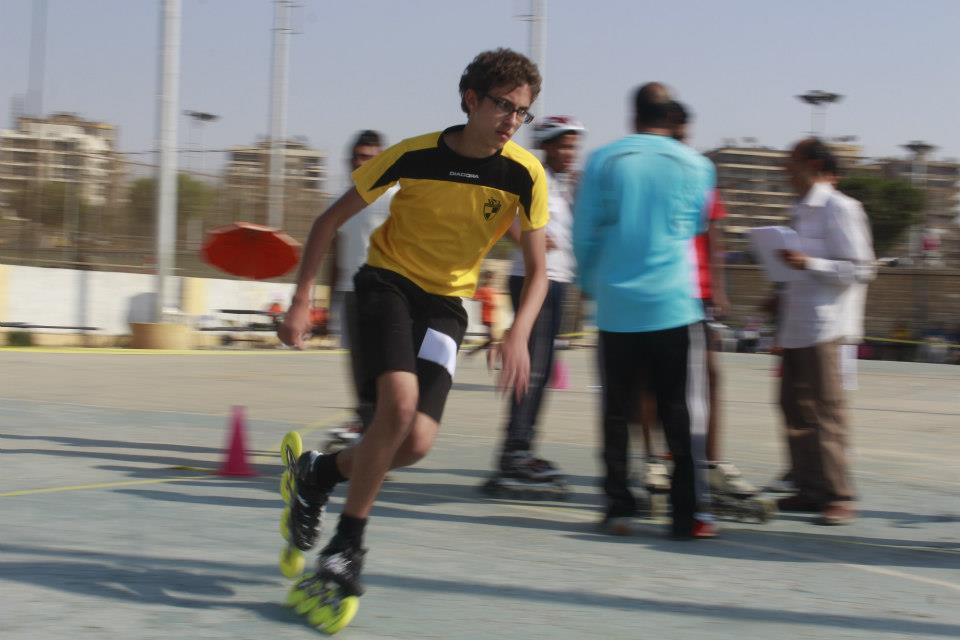 There are three sports in Egypt which operate under the banner of the Egyptian Amateur Roller Skating Federation (EARSF): speed skating, rink hockey, and artistic skating. Under the EARSF local teams train and compete in order to participate in larger tournaments both domestically and overseas.

EARSF is a member of the International Federation of Roller Sports (FIRS), which hosts the yearly world cup events for the aforementioned sports. Last Friday the Egyptian Federation held the first round of the Egyptian Speed Skating League’s 200m and 500m races, attracting over 200 skaters.

There are three more rounds to be held before the 2013 Speed Skating Championships take place. According to Sameh Hager, board member of the EARSF, there are currently five clubs which combined boast roughly 400 registered skaters between the ages of six and 29. Hager said both male and female participants are welcome and encouraged to participate.

Next week on Friday the Federation will hold the 500m speed skating semi-finals, where the six best candidates from every category will proceed to the finals.

“In regards to rink hockey there are currently eight active clubs,” Hager said. “Matches are usually held twice-weekly on Thursdays and Fridays,” he added. Matches are played across Cairo between teams from Al-Dakhlia , Al-Zhoor , Zamalek , Al-Kahraba, Damanhour , Al-Seka Al-Hadeed , Maadi and Nasr City.

“So far Al-Dakhlia is at the top of the league table with no losses,” Hager said, followed by Nasr City, Maadi and Zamalek. Spectators are welcome to attend any of the events, whether they are Egyptian or foreign, and are encouraged to sign up to take part in competitions.

An “over 40s” competition is taking place this Thursday, intended for skaters 40 years old or older. This competition is semi-official as the Federation is aiming to include it into their agendas in the future. Participants are also retired skaters, competing outside the supervision of their clubs but flying under their banner.

Roller sports were considered a candidate for the 2016 Summer Olympics but were dropped in favour of rugby sevens and golf. Hager said that EARSF and FIRS have been working hard to get speed skating recognised as an Olympic sport.

To help promote speed skating, Hager said EARSF is organising a large skating event by the Great Pyramids of Giza with the help of the sports and tourism ministries. The goal of the project will be to promote the sport and tourism in Egypt, although the details of which are still under discussion and the event itself is planned for July once school exams have ended.

Hager said the artistic skating competitions are focused on singles matches. There are team shows but these are not part of any competition. “Most of our artistic skaters are girls,” Hager said, “but there is a small group of boys also participating.”

Port Said also has a roller skating club, but due to the ongoing turmoil all sports activities have been suspended. Hager said the Port Said skaters over 40 will still participate in Thursday’s match, saying that the Federation encourages Port Said to return to the sport. “We don’t have any issues with the people from Port Said,” he said. “We want to show the country that there are no problems between us, we are one people, one nation.”