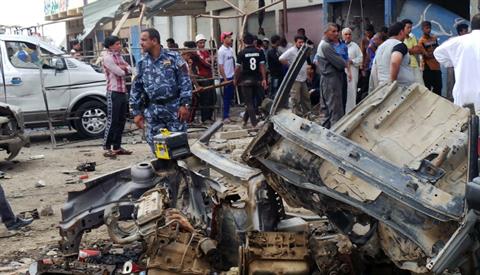 AFP – BAGHDAD –  Bombings in Iraq, including one against an MP’s convoy, killed four people and wounded 18 on Wednesday, just days ahead of the country’s first elections since US troops departed, officials said.

In the deadliest attack, a car bomb exploded near an army checkpoint in Abu Ghraib, west of the capital, killing two people and wounding six, while another car bomb in the Jihad area of south Baghdad killed at least one person and wounded six, an interior ministry official and medical sources said.

And in Ramadi, a magnetic “sticky bomb” killed a secondary school teacher, a police officer and a doctor said.

A roadside bomb targeted a convoy carrying an MP from the secular, Sunni-backed Iraqiya bloc in Madain, south of Baghdad, wounding four people but not the politician, while a “sticky bomb” wounded two people in Mansur in west Baghdad, the ministry official and medical sources said.

An estimated 13.5 million Iraqis are eligible to vote for more than 8,000 candidates standing in Saturday’s provincial elections, with 378 seats being contested.

Iraqi forces are solely responsible for polling security, the first time they have been in charge without support from American or other international forces during elections since dictator Saddam Hussein was toppled in 2003.

US forces eventually withdrew from Iraq in December 2011.

The elections are to be held amid a spike in violence. Attacks have killed more than 200 people each month so far this year, compared to tolls well below that figure for the last three months of 2012, according to AFP figures.

While violence has fallen significantly from the height of Iraq’s sectarian war, the country still faces significant security challenges, mainly from Sunni militants linked to Al-Qaeda who carry out attacks in a bid to undermine confidence in the Shi’a-led government.