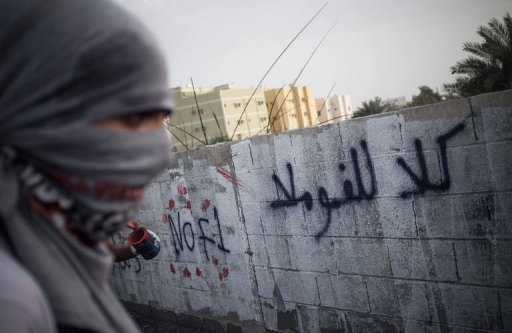 “No. No to blood Formula” and “your race is a crime,” chanted protesters who took to the streets in Shi’a villages, denouncing the decision of Formula One to go ahead with the race despite complaints of rights abuses by the kingdom’s Sunni rulers against Shi’as.

The protests ended in violence when demonstrators threw petrol bombs at riot police who responded with tear gas canisters and stun grenades, the witnesses said.

The February 14 Revolution Youth Coalition, a clandestine cyber group that mobilises protesters, boasted on its Twitter account that people took to the streets with “a steel will”.

It said people were “imposing a different rhythm in the street, in the first round of Volcanos of Flames” — referring to the name they have given to a week of demonstrations against the F1 race in the Gulf state.

Police announced they had arrested six people for blocking roads and setting cars ablaze, as the protests intensified ahead of Friday’s practice sessions at the Sakhir circuit south of the capital.

Advocacy group Human Rights Watch accused Formula One of “ignoring rights abuses”, saying that security forces in Bahrain have “increased their repressive actions in the lead up to the 2013 race.”

“Bahrain is already tightening the lid on protest as the Formula One race grows near,” said Sarah Leah Whitson, HRW Middle East director.

“The Formula One organisers apparently prefer to bury their heads in the sand, risking holding their race against repression it has provoked,” she added.

The interior ministry said late Wednesday that police arrested “a number of terrorists accused of committing terrorist attacks in several areas of the kingdom.”

It said police arrested a man suspected of setting a car on fire on Sunday at the Financial Harbour neighbourhood of Manama.

Four others were arrested over stealing and burning a car in the middle of a roundabout in Hamad City suburb of Manama, in addition to a man who was among a group which blocked a main road in the capital, the ministry said in a statement.

Bahrain was rocked by month-long pro-democracy protests led by the kingdom’s Shi’as in early 2011 that were crushed with the help of Gulf troops led by Sunni-ruled Saudi Arabia.

The Formula One race was cancelled that year but went ahead in 2012.

Home to the US Fifth Fleet and strategically situated across the Gulf from Shi’a-ruled Iran, Bahrain has continued to witness sporadic demonstrations, now mostly outside the capital.

Human rights groups say a total of 80 people have been killed in the unrest in Bahrain since February 2011.