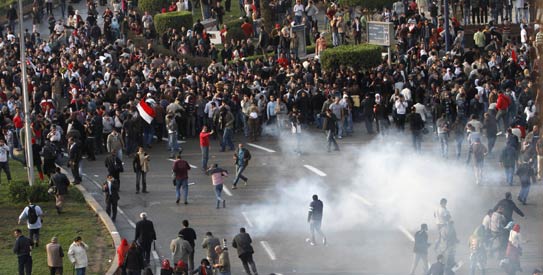 Former Prime Minister Aly Lotfy said on Saturday that Egypt’s ranking among countries free of corruption has worsened since the 25 January revolution.

Lotfy spoke during a press conference on the authorities’ responsibility to prevent monetary and administrative corruption, held at Ain Shams University.

The former prime minister reviewed the results of research he conducted on corruption. He said that the top three authorities in Egypt suffering from corruption are the customs authority, the public petroleum authority, and the Ministry of Interior.

Lotfy said that corruption can be fought by reinforcing transparency, accountability, administrative and financial reform, and cultural, societal and religious awareness.

Tala’at Afifi, the Minister of Endowments, said that those in power are responsible for putting an end to corruption.

The head of the Central Auditing Authority Hesham Geneina described the authority’s efforts to combat corruption. He called on legislators to produce better laws that would allow the authority to improve its performance.

“We have struggled, as some institutions prevent us from monitoring their activities,” Geneina said. “This behaviour encourages corruption.”

He said after discussions with Defence Minister Abdel Fatah Al-Sisi, the authority had secured permission to monitor the Ministry of Defence’s activities, excluding those which concern national security.

He stated that he had delegated a committee to look into financial transactions in the presidency.  This is not a form of meddling in the presidency’s affairs, Geneina said, but merely a way of monitoring how public money is spent.

“If any financial or administrative violation takes place within the presidency, it will be documented in a report sent to the authority,” he said.