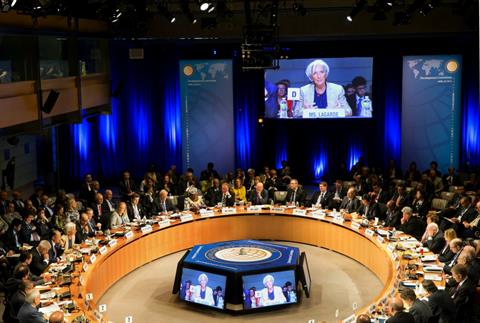 The International Monetary Fund (IMF) has declined to specify when a deal will be struck with Egypt regarding the proposed $4.8bn loan.

When asked to specify when the loan could be granted during a press conference on Saturday on the sidelines of the IMF-World Bank annual spring meeting, IMF Managing Director Christine Lagarde declined to answer.

She did, however, say that she hoped the IMF and Egypt would “continue the progress that we have made”.

“It is a task and we will not give up, we will not leave the table, we have to continue the work and have to support the Egyptian population,” she added.

She also confirmed that she had met with Egyptian officials on the sidelines of weekend IMF meetings in Washington.

Egyptian officials arrived in Washington DC on Wednesday for the spring meeting. They stated that they were looking forward to signing an initial agreement, according to a Ministry of Finance (MOF) release.

Lagarde said that the IMF “will remain engaged in loan negotiations with Egypt but wants the international community to provide financing too”.

On Thursday, Lagarde said that the IMF-Egypt negotiations had “gone back to the drawing board”, signaling a further slowdown in Egypt’s bid to secure the loan.

She continued: “I was in Egypt myself in August 2012. We had a programme that was just about ready in November 2012, when, as you know, political decisions were made to not put in place the fiscal decisions that were intended, which obviously made the whole programme redundant.”

Since November 2012, Egypt has been negotiating with the IMF for the loan, which is expected to unlock further potential aid for the country.

Negotiations have been suspended for over four months amid unrest sparked by President Mohamed Morsi’s recent economic reforms.

Commenting on the IMF’s reluctance to specify a timeframe, economist Karim Helal said that it was a “very negative indicator”.

“There is no progress regarding the government’s economic reform programme,” he continued. “We don’t even know what kind of a programme it is. Furthermore, there are no concrete announcements that have been made to reassure the IMF.”

He added that there was currently a slowdown on behalf of the government in executing the IMF loan terms, and that there were “many question marks around the reasons for this”.

“Of course, the IMF delegation that visited Egypt two weeks ago gave a very bad picture of the current situation in Egypt, and so there remains no clear decision on their part,” he said.

“It is ridiculous that the government dreams of signing any agreements during the spring meeting,” he continued. “The IMF will do no such thing until it sees its terms come into effect.”