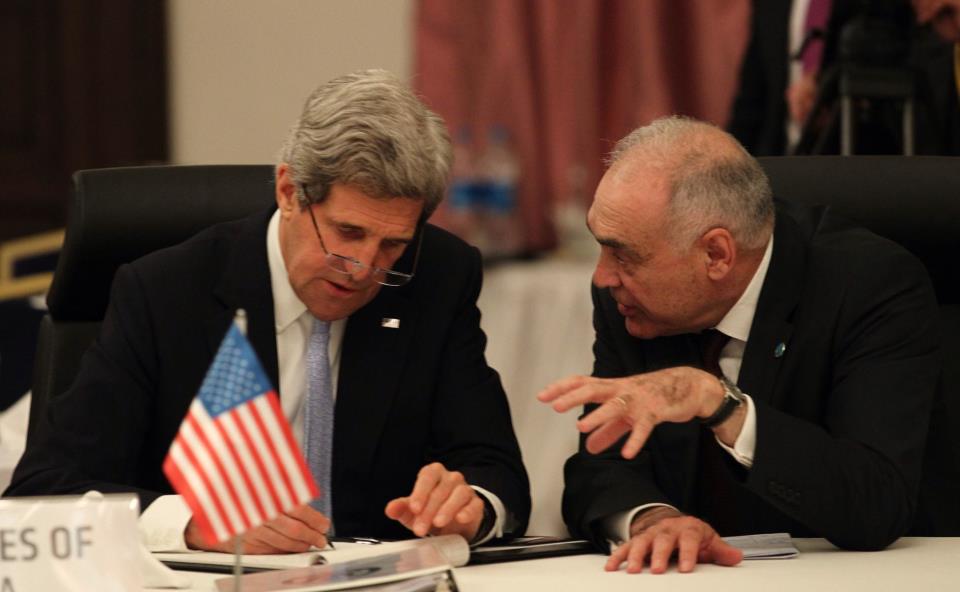 The announcements came after meetings with the Syrian National Coalition (SNC) and international partners, including leader of the SNC Ahmed Moaz Al-Khatib and Commander in Chief of the Supreme Military Council (SMC) Selim Idris.

The US will increase its aid to the Syrian opposition and civil society groups by $123m, bringing the total to $250m, according to a statement from the US State Department. “We intend to expand this new support,” read the statement, “beyond military food rations and medical kits to include other types of non-lethal supplies.” The details regarding the content of these supplies will be discussed with SMC leaders.

“Kerry urged international partners gathered in Istanbul, as well as all Friends of the Syrian People, to make similar pledges of assistance,” according to the State Department. The goal is to bring the total amount of support for the SNC and SMC to $1bn.

Following Saturday’s meeting, Kamel Amr posted on his official Facebook account, saying: “We seek to start a serious negotiation process between representatives of the [SNC] and representatives of Bashar Al-Assad’s regime who have not stained their hands with the blood of the Syrian people.” He also warned that “a military solution would threaten the territorial integrity of Syria and the social fabric”.

Ahead of the meeting in Istanbul, the SNC published a number of demands that it intended to voice during the Friends of Syria meeting. In the statement, the coalition called on the international community to intervene following confirmed NATO reports that Al-Assad’s forces are using ballistic missiles in certain areas of Syria.

The coalition commented that the Friends of Syria have the intelligence and equipment to take a stand, “however, they have not taken any serious position to stop this terrorism and Assad’s crimes”.

The coalition statement called for drone strikes to be carried out on military targets to prevent the use of ballistic and chemical weapons. It also requested for work to begin on formulating a United Nations Security Council resolution to condemn the use of such weapons. The final request was to implement a no fly zone along the northern and southern borders to facilitate the return of Syrian refugees.

The Foreign Minister will be meeting with Palestinian President Mahmoud Abbas on Sunday to discuss developments of the situation in Palestine.

Kamel Amr is scheduled to travel to Luxembourg on Sunday for a meeting with a group of foreign ministers and representatives of the European Union to discuss the situation in the Middle East with a special focus on the Syrian crisis.