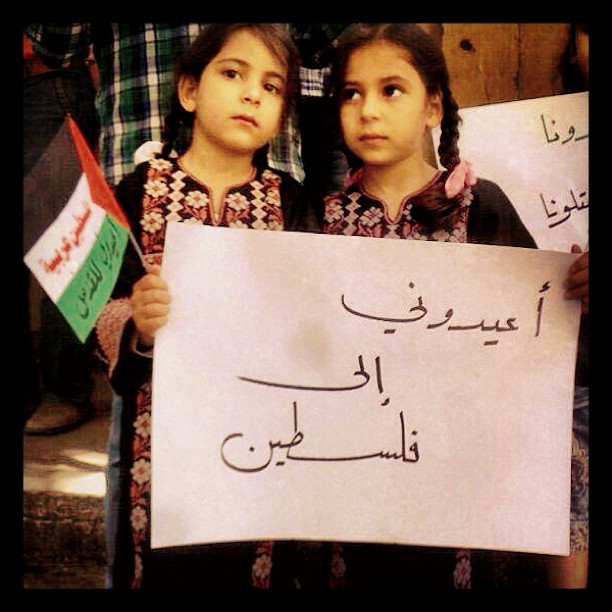 Their demands include the recognition of their situation and equality with Syrian refugees. “The Palestinian embassy in Cairo should fulfil its duties towards the refugees in term of providing them with medical aid, food and financial aid,” a statement on the page said.

The protesters are also demanding the embassy return the complete list of names of Palestinian-Syrian refugees currently in Egypt, adding that the embassy has “kept and obscured this list that was initially created by the refugees themselves”.

If their demands are not met, the statement said, then the Palestinian ambassador in Cairo should be dismissed and replaced by an ambassador “that is capable of resolving the demands outlined above”.

According to Hanine Hassan, the coordinator of the Palestinian-Syrian Refugee Committee, there are roughly 10,000 Palestinian-Syrian refugees in Egypt. “We have roughly 2,000 families here in Egypt,” she said. “Many of them are elderly people who fled from Palestine [in 1948 and 1967] to Syria and have now had to flee again to Egypt.”

Hassan said there are more refugees coming into Egypt every day. “The Egyptian government refuses to recognise [Palestinian coming from Syrian] as refugees and this is the core of the problem,” she said. “The government recognises Syrians as refugees, giving them the right to protection and to live in Egypt until the conflict is resolved.”

Having refugee status also allows refugees to register with the UNHCR. The Palestinians do not have this right. “We have an embassy that is supposed to advise them and follow up with the government but it has completely failed to protect us over the past seven months,” Hassan said.