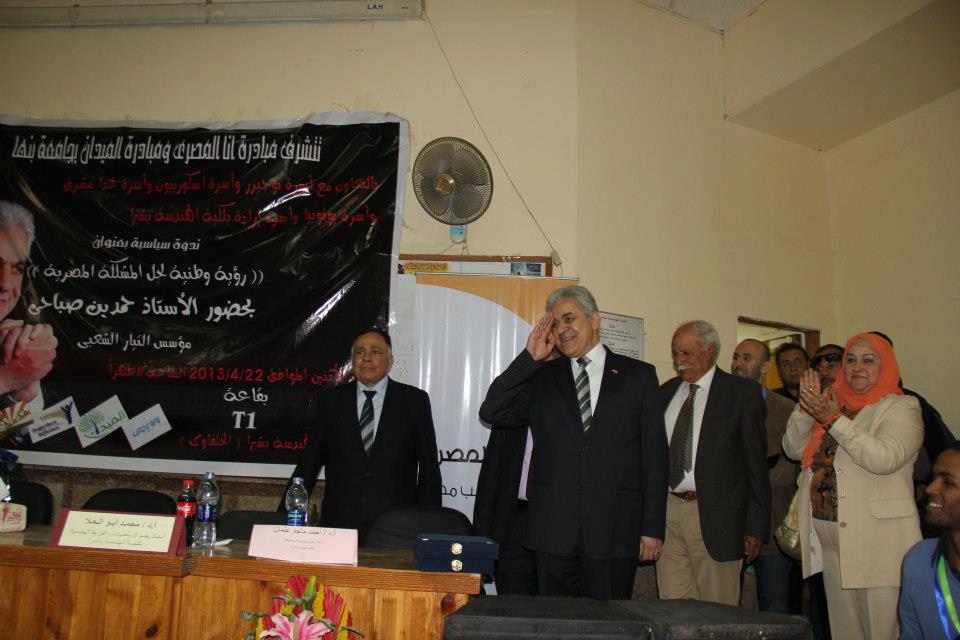 Clashes took place between supporters and opponents of Hamdeen Sabahy during a seminar in the Faculty of Engineering at Banha University in Shubra on Monday.

Sabahy, a former presidential candidate and leader of the Al-Tayar Al-Sha’aby, was invited by engineering students at Banha University to speak at a seminar entitled “A Nationalist Vision to Solve Egypt’s Problems”.

Islamist students chanted against Sabahy and asked him to leave; supporters of Sabahy responded by chanting against the Muslim Brotherhood and President Mohamed Morsi’s regime, which led to clashes between the two parties.

Students recited the Quran to restore calm to the hall but as soon as the recitation ended clashes started again.

Sabahy’s supporters surrounded the podium to protect him as he called one of the students chanting against him to ask any questions he liked.

The student, who said he was a member of the Muslim Brotherhood, asked Sabahy about his stance on the Syrian regime and Mubarak’s trial. He also asked him about his financial disclosure report.

Sabahy said that the Al-Tayar Al-Sha’aby is against Bashar Al-Assad’s regime and condemned the atrocities the regime has committed in Syria.

“The parliament should have considered passing a law for transitional justice to prosecute Mubarak and his regime; even when the president had legislative powers he didn’t consider such a law,” Sabahy said, commenting on the trial of ousted president Hosni Mubarak.

He added that he was the only presidential candidate who presented a financial disclosure, saying: “I have about EGP 7,000 in my bank account, which I got from the Press Syndicate; if I ever became president my account will remain as it is.”

Islamist students responded to this statement by chanting, “You’re a liar”. Sabahy replied: “If any of you have evidence that I’m lying, please come forward.”

He added that he welcomed any opponents to come to the headquarters of the Al-Tayar Al-Sha’aby to ask questions or discuss their views.

“The revolution will triumph; we will establish democracy and social justice one day,” Sabahy said.

The Muslim Brotherhood Youth could not be reached for comment.