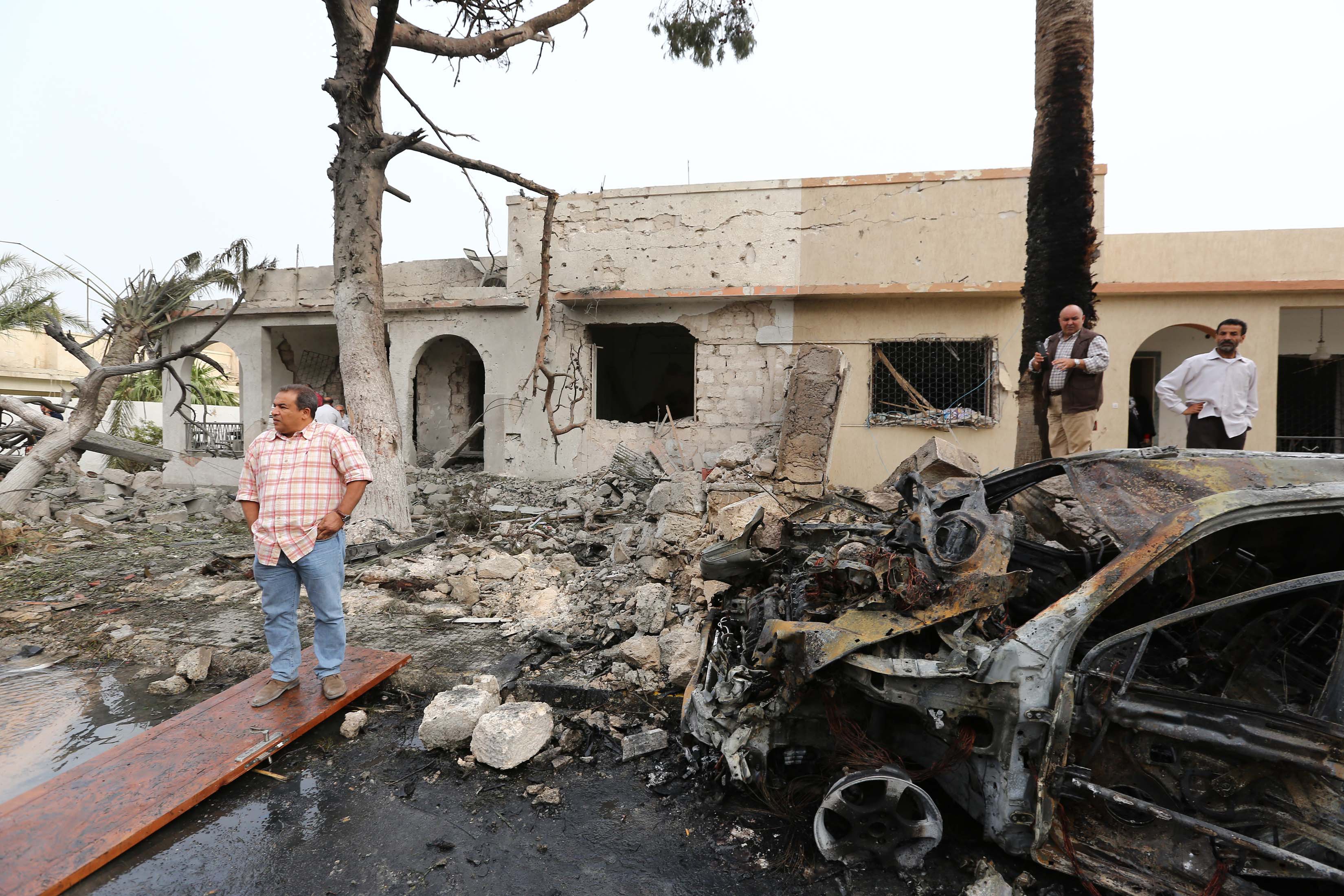 (AFP) – A car bomb hit the France embassy in Libya on Tuesday, wounding two French guards and causing extensive damage in the first attack on a foreign mission since militants stormed the US consulate in Benghazi in September.

The attack comes as Libya continues to suffer from a lack of security following the 2011 ouster of long-time dictator Moamer Kadhafi and as French forces are engaged in a battle against Islamist extremists in Mali.

The explosion occurred around 7:10 am (0510 GMT), Tripoli security chief Mahmud al-Sherif said, after an explosives-laden car was parked outside the mission’s front door.

Sherif said “this was not a suicide bombing,” adding that “we face several threats and enemies, and it is too early to point to any party in particular.”

An AFP correspondent said the wall surrounding the property was destroyed and the embassy building extensively damaged, with one French employee saying “there’s nothing left of my office”.

The explosion, which created a deep crater in the street, destroyed two cars parked nearby, damaged two neighbouring villas and blew out the windows of a shop 200 metres (yards) away.

The street in front of the mission was flooded with water, apparently from a pipe ripped by the blast.

A French source said one guard was seriously wounded and another lightly hurt in the attack on the mission, housed in a two-storey villa in the upmarket Gargaresh area.

Libyan state news agency Lana added that a girl living in the neighbourhood was also hurt, but gave no details.

“It was a big mistake to site the French embassy in our neighbourhood,” said a local resident.

Jamal Omar, who lives across the street and whose face was slightly injured, said the car must have been parked only minutes before the explosion.

“I was sweeping outside my house, and there wasn’t any car in front of the embassy. The explosion happened less than five minutes after I went back inside.”

“In liaison with the Libyan authorities, the services of the state will do everything to establish the circumstances of this odious act and rapidly identify the perpetrators,” Foreign Minister Laurent Fabius said in a statement.

A diplomat in Paris said Fabius would fly to Tripoli later in the day.

Hollande said in a statement that “France expects the Libyan authorities to ensure that all possible light is shed on this unacceptable act so that the perpetrators are identified and brought to justice.”

Libya’s foreign minister condemned the bombing as a “terrorist act,” but decline to speculate on who carried it out or what the motive was.

“We strongly condemn this act, which we regard as a terrorist act against a brother nation that supported Libya during the revolution” of 2011 that ousted Kadhafi, Abdel Aziz told AFP at the scene.

“We regret this act and express our solidarity with the French government and people,” he added, announcing that a joint commission had been formed to investigate the attack.

The French primary and high schools, both located in the same neighbourhood as the embassy, closed on Tuesday for an indefinite time, parents told AFP.

Since Kadhafi’s fall, Libya has been plagued by persistent insecurity, especially in the region of Benghazi, which has been hit by bombings and assassinations that has forced many Westerners to leave the eastern city.

Four Americans, including ambassador Chris Stevens, were killed when heavily armed men overran the Benghazi mission on September 11, setting fire to much of the compound and then attacking a nearby annex.

The Benghazi attack sparked a ferocious backlash from Republicans during the 2012 US presidential race, who alleged that President Barack Obama’s administration sought to cover up details of the incident.

The violence in Libya is often blamed on radical Islamists persecuted under Kadhafi and who now want to settle old scores, while security remains the prerogative of militias in a number of important areas.

Armed jihadist groups hurt by the French intervention in northern Mali had threatened retaliation by attacking French interests across the world.