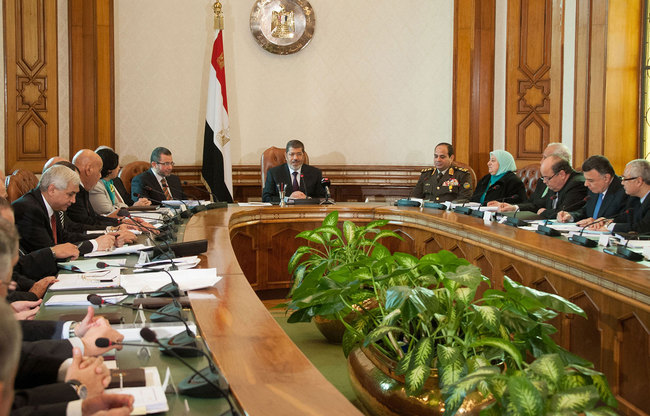 Gadallah issued a statement outlining his reasons for leaving his position, criticising the way in which the government has operated in recent months. He accused the government of neglecting to engage the youth in the “defining moment in the history of Egypt”, interfering in the judiciary, and allowing an economic collapse.

The former advisor said the government “lacked a clear vision for the management of the state, building the future of Egypt, and achieving the goals of the revolution”, which he said involved a shared vision when it came to national projects that would foster the development of the country.

He also considered the continuation of Prime Minister Hesham Qandil’s government as another reason for his resignation. He accused Qandil’s cabinet of failing economically and politically, and not achieving any progress in state security. He added that Morsi needed to replace the cabinet and consider all perspectives from different political actors when appointing new ministers.

Gadallah objected to the way President Morsi’s government has handled the judiciary, saying it was trying to undermine its independence. The appointment of Prosecutor General Tala’at Abdallah, according to Gadallah, was an issue that had not been resolved and continues to be a major point of contention between political factions.

The legal expert also lodged the same accusation against the government that many opposition figures have made in the past, saying that he also resigned because of “the monopoly of a single stream in the management of the transitional phase, and the non-participation of the rest of the political factions in decision making”, saying the ruling party had marginalised other political factions.

Gadallah also highlighted the inability of the government to conduct national dialogue involving all parties and political players in an effort to achieve political consensus and economic security, failing to allow the country to move forward.

He added that the government “does not enable the youth to exercise their pivotal role in the political, economic, and security fields”, saying they had been “deliberately” marginalised and excluded.

Gadallah also took issue with Egypt’s recent dealings with Iran, saying it had “opened the doors of Egypt to Iranian tourism, subsequently opening the doors of Shi’ism, Shi’a mosques and a Shi’a tide” that would eventually eliminate the Sunni sect in Egypt.

The former advisor said he had disagreed with the president’s November constitutional declaration because it would create division, especially aspects of the decree guaranteeing immunisation to the Constituent Assembly and the Shura Council. He also objected to not initially submitting the amended elections law ahead of House of Representative elections to the Supreme Constitutional Court.

Gadallah is the 12th advisor to resign from the president’s team since the beginning of Morsi’s tenure. The team, which started with 21 members is now made up of nine advisors and assistants, including Hussein Al-Qazzaz, Essam Haddad, Ayman Ahmed Ali, Ahmed Omran, Mohi Hamed, Omayma Kamel, Pakinam El Sharqawy, and Yehya Hamed.