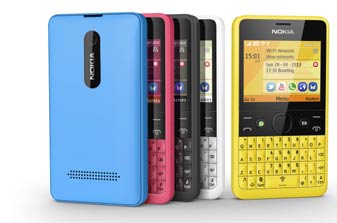 Nokia announced on Wednesday the release of its new Asha 210 model equipped with a QWERTY keyboard and dual SIM card slots.

The phone will come equipped with WhatsApp, which users would be able to access via a button located on the front of the phone, used specifically for the application.

The device will also come equipped with a two-megapixel camera located on the back of the phone, a 1,110mAh battery enabling 12-hour talk time, in addition to Wifi capabilities and a 2G network.

The phone, set to cost $72 and begin selling in the second quarter of the current fiscal year, represents Nokia’s attempt to begin targeting lower income developing world markets, where demand for mobile smart phones is growing. It will be available in the Middle East, Asia, Africa and Latin America, as well as some European countries.

The company also stated that the phone would come equipped with the Easyswap application, which allows users to easily change SIM cards without having to switch off one’s phone.