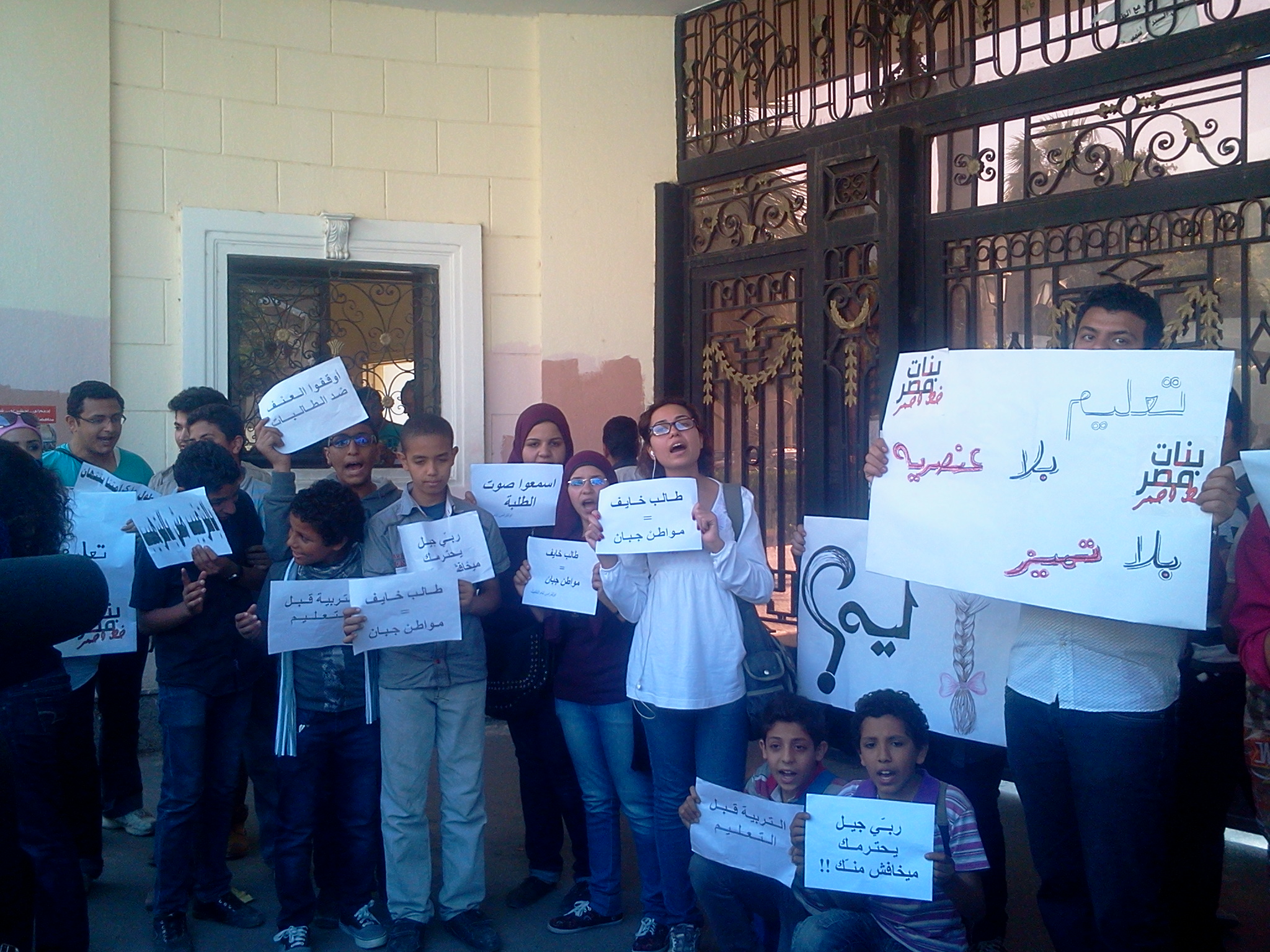 Dozens of students and NGO members protested on Wednesday at the ministry of education against the recent increase in incidents of violence against school students.

Protesters gathered at the ministry’s main gate, holding several signs and chanting against the minister of education, President Mohamed Morsi, and the Muslim Brotherhood. Protesters wrote slogans expressing their demands on the walls of the ministry.

The demands included dismissing the minister of education, subjecting schools to regular ministerial inspections, and taking legal action against teachers who violate the rights of the students rather than ordinary suspensions by the ministry of education.

“These protesters appear every once in a while, raising different demands, and I don’t know if they are really the ones behind their diverse demands. We are abiding by the relevant laws and regulations. If you want to change those laws, head to the nearby Shura Council,” said Hisham Kamal, the director of the security department at the ministry of education.

Kamal said the ministry only suspends students who violate the rules of the Egyptian educational system. “Some students were suspended for exceeding the maximum absence limit, some were engaged in fights with their teachers and colleagues, while some were suspended for spreading political propaganda, which is forbidden in schools.”

Kamal said that any incident of violence against a student is dealt with immediately by the ministry’s officials. “The teacher who cut a student’s hair in Luxor was suspended,” he explained. Kamal further claimed that it is not possible for sexual harassment to take place in schools, explaining that no teacher would be able to harass a student in front of a class attended by 60 students. “There is no way this could happen, unless the student went voluntarily with the teacher to a location where he harassed her, and at that point we would no longer see this as harassment.”

Fatma El-Sherif, a member of the Fouada Watch women’s rights group, claimed that teachers frequently beat, insult, and harass students. She added that the education ministry’s punishments do not deter teachers, claiming that they are rarely imposed in practice. “With the exception of the Luxor teacher, no other teachers have been punished for their violations of students’ rights,” she said.

During the protest, Kamal proposed that protesters met with Mohamed Al-Serougy, the ministry’s media advisor, to discuss their demands. However, the protesters rejected this idea and insisted that the dismissal of the minister of education was a precondition to any negotiations.