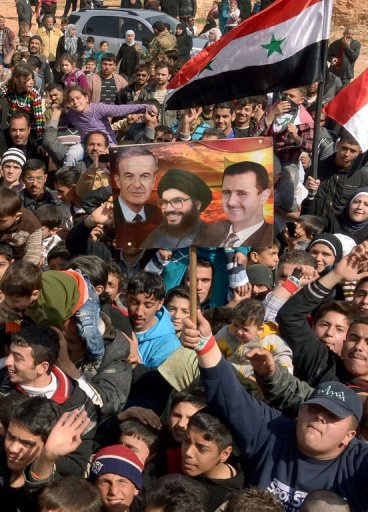 AFP – BEIRUT — Lebanon’s Shi’a Hezbollah movement came under increasing pressure over accusations it is backing regime troops in Syria, as a rebel leader warned of the risk of sparking a sectarian war.

Inside Syria soldiers seized a key town near Damascus from rebels following weeks of fierce clashes, a monitoring group said, and each side blamed the other after fighting destroyed the minaret of Aleppo’s ancient Umayyad mosque.

“Hezbollah’s intervention in Syria has complicated matters deeply, and I expected you, given your political and social stature, to play a more positive role” said Khatib in a letter posted on Facebook.

The message was also filmed and posted on YouTube.

Iran-backed Hezbollah, a close ally of President Bashar al-Assad’s regime, has denied Syrian opposition accusations that it has sent its elite troops into Syria to support regime troops battling insurgents.

It says Syrian rebels have targeted Shi’a areas of Syria inhabited by Lebanese and that Shi’as in Syria have a right to self-defence.

But the accusations against Hezbollah have multiplied as fighting escalated this week in the Qusayr area near the Lebanon border.

“The claim of defence for Shi’a villages is unacceptable,” said Khatib, who on Sunday quit as head of Syria’s main opposition National Coalition in protest at what he said was world inaction over Assad’s onslaught on the rebels.

“There is a cunning plan to drag the Islamic world into sectarian conflict pitting Sunnis against Shi’as, starting from Syria and Lebanon, only then to engulf all countries in the region, including Iran and Turkey,” he added.

But nobody could win in such a conflict, he said.

“Aren’t 1,000 years of strife between Sunnis and Shi’as enough for us to bury this narrow sectarian mentality?” he asked.

President Assad belongs to Syria’s minority Alawite sect, an offshoot of Shi’a Islam. Most of the country’s population — including the rebel fighters — are Sunnis.

But the main rebel group, the Free Syrian Army, rejected the call to jihad in a statement Wednesday.

“We reject any presence of foreign fighters, regardless of where they are from,” FSA political and media coordinator Louay Muqdad told AFP.

“We have said that what we are missing in Syria is weapons, not men.”

Two Lebanese Salafist sheikhs have called on their followers to join rebels fighting in Syria and to support Sunni residents of the embattled central province of Homs, following the reports of Hezbollah’s intervention.

Lebanon’s President Michel Sleiman meanwhile reiterated the country’s official stance of neutrality in the conflict, saying no weapons or fighters should be allowed to cross into Syria, the National News Agency reported.

“After trying dozens of times to re-enter into the town, rebels withdrew at dawn after putting up a fierce resistance,” he told AFP.

The Observatory also said that mortar rounds killed seven civilians in the Jaramana suburb of Damascus, which is held by the regime, with another 30 wounded, six of them critically.

The Damascus regime and rebel forces meanwhile blamed each other for the destruction Wednesday of the minaret of Aleppo’s ancient Umayyad mosque, Syrian state media and a watchdog reported.

An archaeological treasure in Aleppo’s UNESCO-listed Old City, the mosque had already suffered extensive damage during months of fighting. Rebels said they had managed to salvage ancient handwritten Koranic manuscripts.

According to UN figures the conflict in Syria has already left more than 70,000 people dead since it began in March 2011.