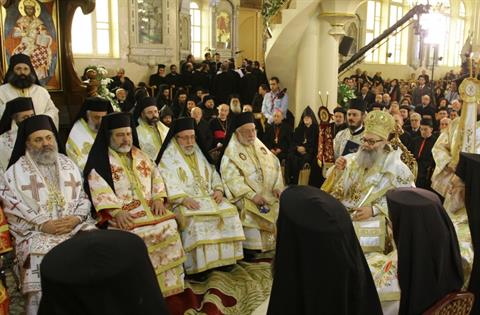 AFP – BEIRUT –  Pope Francis called Wednesday for the release of two Syrian bishops kidnapped by gunmen near Aleppo, after a Christian group appeared to retract its claim that the clerics had been freed.

Speaking to an audience of 100,000 at the Vatican, Francis said there were “contradictory reports” about the fate of the bishops and asked “they be returned quickly to their communities.”

The “Oeuvre d’Orient” Christian association announced Tuesday that the bishops had been released, but Wednesday the group backed away from the claim.

“Yesterday evening we received information from the Greek Orthodox Patriarchate questioning the release of the two bishops,” said Catherine Baumont, spokeswoman for the association, which works to help Middle Eastern Christians.

“Unfortunately no tangible proof of the release has been obtained. The situation remains unclear, and we still don’t know who took them,” Baumont told AFP.

And a source in Aleppo’s Greek Orthodox archdiocese told AFP it had no news on the fate of the bishops.

“We have no new information,” said Ghassan Ward, a priest at the archdiocese. “We can say that [as far as we know] they haven’t been freed.”

Ward said there had been “no contact with them,” adding that “efforts are continuing” to secure their release.

“We are very worried,” he said.

The two men were traveling from the Turkish border when armed men intercepted the car they were in, forcing them out of the vehicle, Syrian state media and church sources reported.

The kidnappers were believed to be Chechen fighters, who stopped the car in an area outside of Aleppo, the church sources said.

“The news which we have received is that an armed group … [of] Chechens stopped the car and kidnapped the two bishops while the driver was killed,” an official from the Syriac Orthodox diocese said in a statement posted online.

A source in the Greek Orthodox Church said that the bishops’ kidnappers had described themselves as “Chechen jihadists.”

The Syrian Observatory for Human Rights watchdog said Wednesday that the bishops had been kidnapped “in the region west of Aleppo, where a brigade of fighters from Dagestan is active.”

“Four members of this brigade were killed in confrontations with rebels from the Free Syrian Army,” Observatory director Rami Abdel Rahman told AFP.

The Syrian opposition has condemned the kidnapping, saying the rebel Free Syrian Army was not involved and pointing the finger at the Syrian regime.

“Efforts … to uncover the identities of the clerics’ kidnappers and to liberate them indicate that the Syrian regime is responsible for the kidnapping, and [the] killing of Bishop Yohanna Ibrahim’s driver,” the opposition National Coalition said.

Christians account for around 5 percent of Syria’s population, and have remained largely loyal to the regime, fearing the rise of Islamists in any opposition post-Assad state.

In Damascus, the Foreign Ministry, in comments to state media, said they had sent two letters to the U.N. Security Council president and the U.N. secretary-general regarding the abduction and demanding an end to what it said was support of terrorist activity in the country, particularly by Islamists aligned with the jihadist opposition Nusra Front.

The letters repeated the claim that an armed group led by Chechen terrorists intercepted the car transporting the bishops, and said that it had been part of “extremist terrorist activity” carried out by an armed group affiliated with the Nusra Front “and their foreign mercenaries.”

“Syria is determined to confront this organized takfiri terrorism which targets its national unity and the cohesion of its society which is culturally, religiously and ethnically diverse, pointing out that this diversity has been a characteristic of Syria for hundreds of years and represents a model of coexistence in the region,” said the statement carried by SANA.