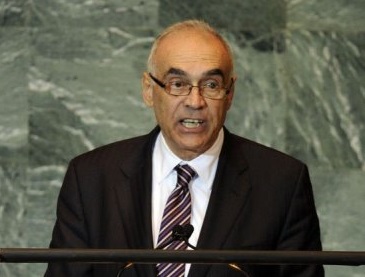 Kamel Amr called for increased African representation in the UN Security Council. He also suggested expanding cooperation between the UN and the African Union (AU).

“The African continent continues to suffer from historical injustice regarding representation in the Security Council, although 70% of the council’s work deals with African issues,” the minister said. He called for increased representation for African countries and called on all states to support African demands.

Kamel Amr praised the cooperation between the UN and the AU highlighting joint projects in Darfur and Somalia. He asserted that there is scope for further cooperation in the area of conflict prevention and resolution. He also called for an increase in UN efforts to support the AU “in the field of preventative diplomacy, including mediation, early warning, and reconstruction and development in the post-conflict phase”. He added that Egypt calls for the launch of a new dialogue between the two organisations to explore new ways of cooperation to build on past successes.

The Foreign Minister praised the work of the AU in the year of its 50th anniversary. He said that “Africa can be proud today”, pointing to the “significant progress towards addressing traditional challenges to peace and security”. He highlighted that since the 1990s, the number of African countries involved in armed conflicts has fallen from 14 to four. Kamel Amr believes this has contributed to “allowing direct resources towards development to enable the continent to achieve economic growth rates exceeding 5% per annum during the last decade.”

He stressed the importance of conflict resolution “through the peaceful settlement of political dialogue, as well as economic development, dissemination of education and reducing the spread of illegal weapons”. He added: “Military solutions have often proven to lack relevance and even resulted in fuelling conflicts and the loss of many innocent victims.”

Egypt was openly opposed to the French military intervention in Mali in January, with both President Mohamed Morsi and the Ministry of Foreign Affairs voicing their opposition and calling for a diplomatic solution.

Kamel Amr called on the international community to support the New Partnership for Africa’s Development (NEPAD). He highlighted that the establishment of a fair trade system in Africa must be established “so as to contribute to maximising the role of international trade as an engine for development.

In his closing remarks, Kamel Amr confirmed “Egypt’s firm support of the African continent’s issues”. He added that Egypt “will spare no effort in supporting efforts to promote peace, stability and development in the continent.”

Kamel Amr is expected to attend an Arab ministerial meeting in Washington DC on 29 April to discuss the Palestinian issue with United States officials.