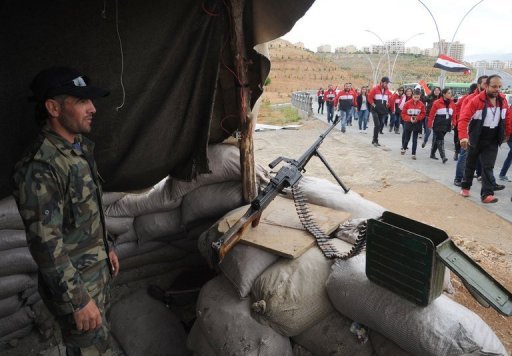 AFP – Fresh fighting broke out on the edges of the Syrian capital on Friday, as troops took on rebels in the north, south and east, backed in some areas by tanks and militia, a watchdog said.

“Fierce clashes are raging in Barzeh district pitting rebels against troops and members of the pro-regime popular committees,” the Syrian Observatory for Human Rights said.

The district in northern Damascus also came under tank fire by the army, the Britain-based group said.

The militiamen were brought in from Esh al-Warwar district, which has a population mainly drawn from the same Alawite minority as President Bashar al-Assad, it added.

Most of the rebels are from Syria’s Sunni Muslim majority.

In its third year, the conflict has grown increasingly sectarian, as Assad’s regime has armed militia among the Alawites and other minority groups.

Analysts say the militia have better knowledge of the ground than the largely conscript army and are more adept at street fighting.

Rebels and troops also clashed in several areas of south Damascus, parts of which have been reduced to rubble by months of fighting.

In the east of the capital, fresh fighting broke out in Jobar district, where the rebels hold a number of enclaves, the Observatory said.

The army also shelled the eastern suburbs, where the rebels have rear-bases they have used to launch attacks inside the capital.

Warplanes, meanwhile, bombarded Ain Terma, east of Damascus, and Daraa to the southwest, said the Observatory.

Both have been flashpoints of Syria’s spiralling conflict and are used by rebels. The army launched a campaign several months ago to crush the insurgency near Damascus and to secure the capital.

Activists say civilians are paying the highest price for the violence near and around the capital.

Thousands of people, among them women and children, are holed up in rebel stronghold Moadamiyet al-Sham close to the town of Daraya, said an activist.

“There is daily bombardment, and thousands of residents in Moadamiyet al-Sham are under siege by the army. There is no bread, no baby formula for children. People are eating rotten bread,” Malek told AFP.

In violence on Thursday, at least 130 people died, the Observatory said — 53 civilians, 27 soldiers and 50 rebels.