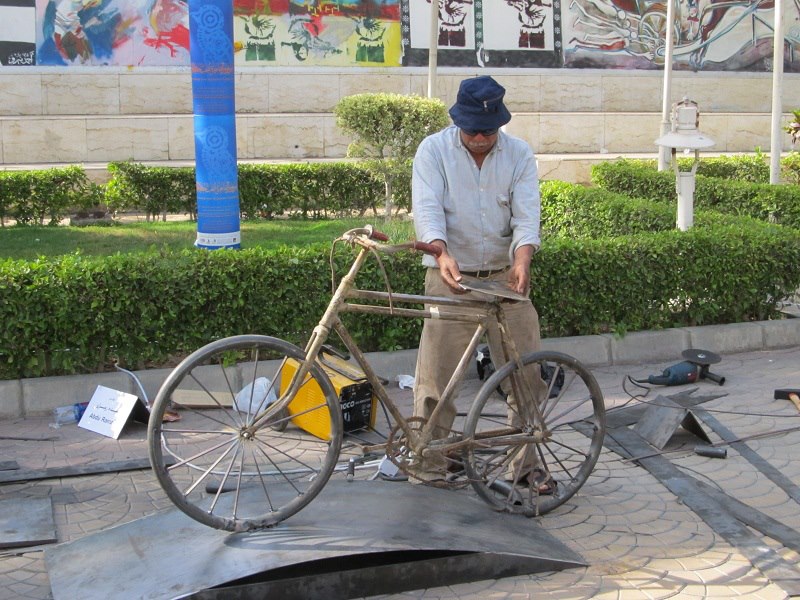 On 23 April the Mahmoud Moukhtar Museum opened Egypt’s first exhibition of art made out of scrap iron by local artists. The idea is quite new to the Egyptian artistic community and we contacted sculptor Omar Toussoun, one of the organisers, for more information.

“The idea of [using] scrap iron first came to mind in the Fine Arts Sector of the Ministry of Culture years ago, and originally we intended to run a workshop accompanied by a national exhibition. The exhibition was postponed for several reasons, including a lack of funding. The idea grew over the years, until artist Dr Salah El Meligy, head of the Fine Arts sector, invited artist Dr Shams Alqrnfeily to develop a broader concept of how to implement the idea and convert it to a symposium of sculpted scrap iron in the garden of the Mahmoud Moukhtar Museum, and I was invited to participate in the organisation,” Toussoun explained.

At first, the organisers intended the symposium to be large in scope. “We brought all our expertise together and tried to optimise the concept so it could be an international symposium, but unfortunately the economic situation did not help us. Artist Salah El Meligy insisted on the implementation of the idea regardless of the circumstances, so we decided to start by using the available potential of local artists and turn it into an international symposium next year,” Toussoun said.

Tousson explained that the idea of sculpting using scrap iron was pioneered by artist Salah Abdulkarim, who is widely seen as the founder of this type of sculpture in Egypt.

The symposium came together under the auspices of several cultural heavyweights, including the minister of culture. Artists were invited to submit scale models of their proposed artwork and a jury consisting of several artists selected the sculptures to be included in the exhibition.

The symposium hopes to be a stepping stone to help this type of art to spread across Egypt and the artists were able to meet while installing their work prior to the opening of the exhibition. “I hope that the symposium provides a good atmosphere for young as well as experienced artists and that it encourages the exchange of expertise. I also hope that it allows the artists to produce the best sculptures,” Toussoun explained.

“In the future we hope to attain more logistical support from the Ministry of Culture and national institutions that sponsored the symposium this year, so that we can convert the symposium to an international event next year,” Toussoun concluded.

The symposium will continue until 9 May and is open every day from 9am to 6pm except Fridays.