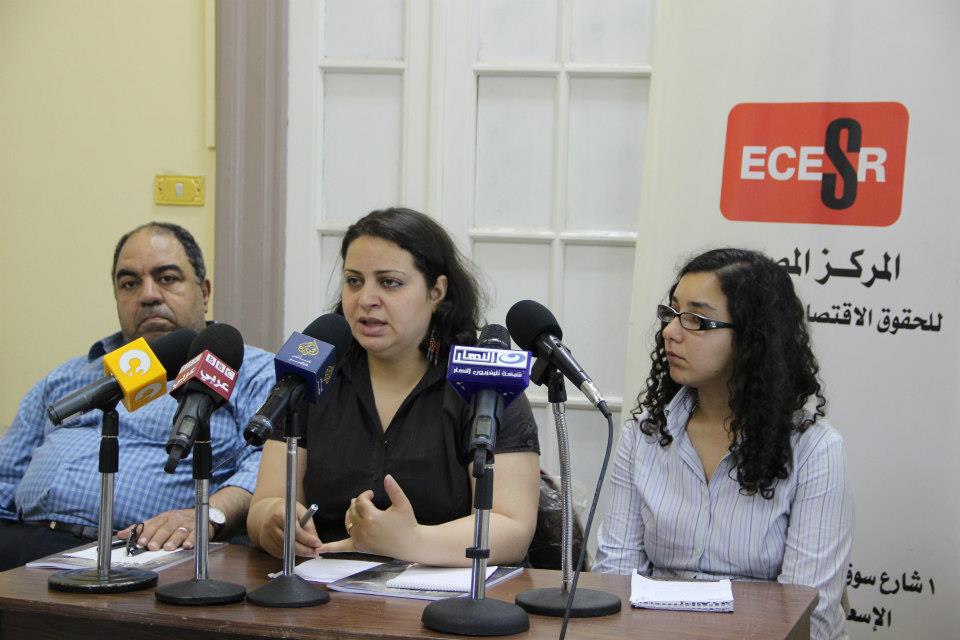 Labour strikes and social protests have more than doubled since President Mohamed Morsi’s election and are likely to continue doing so, a study shows.

A report published on Sunday by the Egyptian Centre for Economic and Social Rights (ECESR) about labour movements during 2012 shows that most of the year’s 3,817 labour strikes and economically motivated social protests happened following Morsi’s election.

Between January and June, the period in which the Supreme Council of the Armed Forces ran the country, there was an average of 185 protests or strikes per month, accounting for 29% of the whole year.

In contrast, workers staged an average of 452 monthly protests or strikes between July and December following Morsi’s inauguration, or 71% of such events in 2012. There have been over 2,400 protests or strikes in the first quarter of 2013 alone, specifically between January and March.

“The statistics demonstrate the doubling of protest movements since July following President Morsi’s inauguration which reflects the will of workers to have their voice reach the new president,” the 70-page report noted. “Several sectors of society tried to direct the president’s attention towards their missing rights while others demonstrated their disappointment in the president and his government.”

Most protests came from the governmental sector, which witnessed 1,355 demonstrations and strikes, accounting for 35.5% of 2012’s total. Private sector workers accounted for 10.3% with 393 protests while public sector employees made up 5.8% with 221 protests.

Strikes and sit-ins were the primary forms of protest used by workers and accounted for 26.8% of protests. Workers staged 519 strikes and either held or threatened to hold sit-ins 504 times.

Vigils, used 851 times, were the second most common form of dissent, making up 22.3% of social protests in 2012. Marches and demonstrations followed with 18.3% while blocking of roads was 14.7%.

Over 36% of labour protests, or 708, were over demands of wage increases. Temporary workers and unemployed citizens demanding employment made up 19.3% with 380 protests.

The rest happened in protest over mismanagement, mistreatment, corruption, or against the closure of factories and businesses.

The report blamed Morsi’s government for not issuing a law for independent unions and syndicates despite their being a draft submitted back in 2011 by former labour minister, Ahmed Al-Borai.

Instead of issuing the law or tasking the Shura Council with doing so, Morsi only amended the old law regarding state-sponsored unions and syndicates so he could replace former regime members with Muslim Brotherhood ones, the ECESR report argued.

Furthermore the government has yet to increase the minimum wage to EGP 1,200 despite a court ordering it to in a 2011 verdict. The government is also raising energy prices, increasing sales tax and devaluing the Egyptian pound in accordance with the International Monetary Fund and World Bank’s demands, the report adds.

“Despite all of this the labour movement continues to defend its rights and works to achieve the goals of the January revolution: bread, freedom, social justice and human dignity,” the ECESR report said.