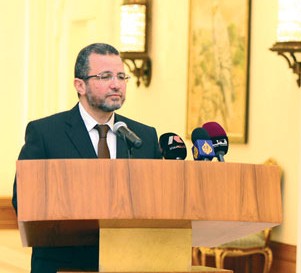 The Egyptian government is currently in talks with its Qatari counterpart regarding the interest rate on $3bn in treasury bonds which Qatar has agreed to purchase from Egypt, with terms currently veering between 4% and 7%, confirmed the media spokesperson for the Ministry of International Cooperation.

“They are just negotiations at the moment,” he said. “We don’t have any more details about when the deal will actually go through.”

According to Reuters, an anonymous Egyptian official involved in the negotiations said that Qatar is asking for a 5% interest rate and with a maturity of 18 months on the bonds.

The Ministry of Finance denied this in a press release on Monday.

According to state-owned Al-Ahram, an anonymous source within the Central Bank of Egypt (CBE) said that the interest rate would range between 3% and 4%.

Commenting on the negotiations, economist Magdy Toulba stated that the reported interest rates were a sign that Qatar was “worried” about the state of the Egyptian economy and deemed the country “high risk” since, he said, most similar international purchases have interest rates ranging between 2% to 2.5%.

Toulba emphasised that Egypt’s low credit ranking was a factor in proposing such “high interest rates”.

Head of the Mashoura Financial Consulting Company Bassant Fahmy, however, deemed the reported interest rates adequate. “A 5% interest rate is not too high compared to international standards,” she said, “especially under the current circumstances prevailing in Egypt.”

She continued: “It is to be expected after the repeated downgrading of credit rating. Additionally, every country has the right to negotiate on its own terms.”

Libya has also promised a $2bn interest-free loan package in order to prop up dwindling Egyptian foreign exchange reserves and help stem a widening budget deficit. Minister of Planning and International Cooperation Ashraf Al-Araby confirmed on Monday that $1bn of this package has now been received and is to be repaid in five years.

The minister expressed confidence that Egypt, with help of international donors, would reach its target of $16bn in reserves by the end of June 2013, according to Al-Ahram.