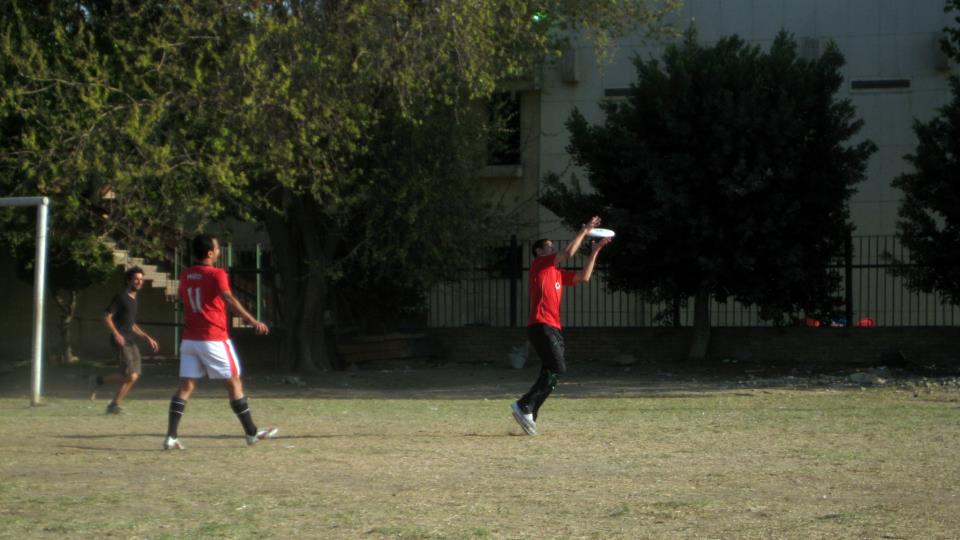 In movies, usually non-Egyptian ones, there always seems to be a park scene. The camera usually depicts people having picnics, walking, jogging, playing with their pets or just hanging around. The scene is usually sunny, optimistic and very inviting. Sometimes it features people playing Frisbee and a dog could be involved in the game.

The idea of Frisbee is not very common or even known in Egyptian culture. It had its time in the 80s but then it quickly faded away into oblivion. Little is known about the Egyptian team that plays Frisbee every week. Their name is Ultimate Frisbee Egypt, which references to the sport that includes opposing teams. Ultimate Frisbee has certain rules and each team has an end zone like in American Football. It is not allowed for players to run with the disk; they have to either receive it or send it to another player. We contacted Ahmed Ali, one of the organisers, to tell us more about it.

“The group was founded in 2002 by Mido Nassar after he stumbled upon a group of foreigners playing Frisbee in Maadi. He started to play with them and then later founded the team,” Ali explained. The team meets every Saturday to play Ultimate Frisbee, in the Gezira Club in Zamalek or in Maadi.

“There are two teams, each consisting of around seven people, on any given weekend. Sometimes we reach 20 members on both teams,” Ali said. “Every once in a while more people join us, usually foreigners who are living or studying here in Egypt. We have people of different nationalities i.e. German, British, along with Egyptians.”

The team is one of a kind and they do not have a counterpart to compete or hold matches. “We are the only team that plays Ultimate Frisbee in Egypt. In the past there was a team at the American University in Cairo, but they no longer exist,” Ali said.

One of the problems the team faces is that not enough people know about them. “If we get enough publicity a lot of Egyptians would want to join since there is no age limit. Children of three or four years old can start to play Frisbee as well as adults, anyone can play. Usually the Egyptians who join the team continue playing with us,” Ali said.

The founders are hoping to form an official entity for the sport. “Right now we are trying to contact the Ministry of Sports to form an official team and federation for the sport so that we can get some support from the government,” Ali explained. The team, which is headed by a captain and four assistants (namely Mohamed Mohsen, Ahmed Ali, Omar Youssef and Islam Ibrahim), is also trying to get more people to join in participating in the sport.

On their Facebook page the team describes the enthusiastic and welcoming spirit of the group: “Ultimate Frisbee Egypt is a friendly co-ed group of Egyptians and expats, and everyone is welcome to come and experience the ultimate fun with us! Worried because you’ve never played before? Don’t be, we’re happy to teach you because that’s what we do. All ages and levels of fitness welcome!”

Readers have contacted us, informing us that this team is not the only Frisbee team in Egypt, and so we’ve written a more comprehensive article about the subject. Thanks to our readers for their concern.