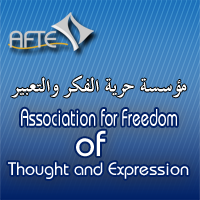 The Association for Freedom of Thought and Expression (AFTE) published an open letter containing recommendations for the protection of journalists.

The open letter, first published on Sunday, makes five recommendations “to the bodies concerned with media and press organisation in Egypt as well as legislative, executive and judicial bodies”. The recommendations demand “the protection of journalists and putting an end to their harassment and persecution while carrying out their missions as well as prosecuting all forms of violence against journalists.”

Nada Kabbary, media spokesperson for AFTE, said: “We are asking people to sign this letter and it will be presented to the government on 3 May, which is the International Day of Press Freedom.”

AFTE says that the letter, while also coinciding with the International Day of Press Freedom, follows “a series of violations that recently face Egyptian journalists and media personnel”. The violations the letter refers to “range from verbal to physical abuse, destruction of equipment, arrest and illegal detention as well as their prosecution in front of both administrative and criminal courts”.

The rights group claims these violations against journalists “not only harm them individually but also undermine the mission of the press to provide the public with information and news”. It adds that this “is protected by international conventions, the constitution and the Egyptian press organising law”.

The recommendations made by AFTE include the processing of all legal complaints filed by journalists “regarding acts of aggression against them” and harsher penalties for those who commit crimes against journalists. It also recommends that the Egyptian government respect “international standards in the various human rights conventions that relate to the protection of journalists” and calls for amendments of legislation that encroaches upon press freedom, citing laws regarding “crimes of defamation, insult and dissemination of false information”. The final recommendation is for the creation of a law “granting free circulation of information to enable journalists to easily access information of public interest”.

At the time of writing, the letter had 291 signatures. The signatures come from a variety of different groups including journalists, representatives of civil society organisations, political activists, bloggers, and others.

Earlier this month Minister of Information Salah Abdel Maqsood faced allegations that he verbally harassed a female journalist when he responded to question about press freedom with “Come here and I’ll tell you where,” which in Egyptian colloquial Arabic has a sexual connotation.

Gamal Fahmy a journalist and member of the Press Syndicate, was summoned for questioning by the prosecutor general following a complaint filed by the presidency in January accusing him of insulting the president in articles he had written.

Topics: Association for Freedom of Thought and Expression