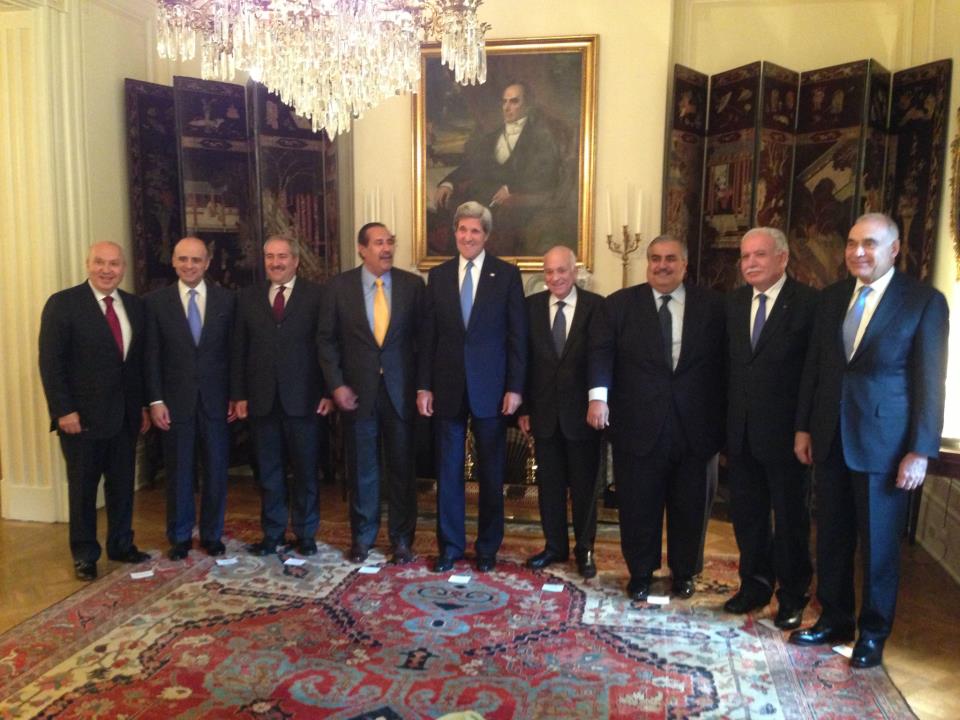 Egyptian Minister of Foreign Affairs Mohamed Kamel Amr attended the meeting and was joined by the Qatari prime minister and foreign minister, the foreign ministers of Palestine, Jordan, and Bahrain, the secretary General of the Arab League and Saudi Arabia’s ambassador in Washington.

During the meeting Kamel Amr asserted: “The current situation in Palestine is unsustainable without reaching a just and comprehensive solution.”  He added, “Egypt is counting on the efforts made by Kerry to push forward the peace process and the establishment of the state of Palestine on the borders of June 1967 with its capital in East Jerusalem”, according to a statement published by the Ministry of Foreign Affairs on Tuesday.

In an interview with the Wall Street Journal ahead of Monday’s meeting, Kamel Amr stressed that the onus for pushing for peace lies with the US. He condemned the building of Israeli settlements on Palestinian territory. “Soon we will not find any land to talk about establishing a Palestinian state on,” he added.

The last direct peace talks between the Israeli and Palestinian sides occurred in 2010 and were sponsored by the US with involvement from Egypt and Jordan. During these talks Israeli Prime Minister Benjamin Netanyahu presented an ultimatum for the Palestinian Authority to recognise Israel as Jewish state or he would not extend the freeze on Israeli settlement building on Palestinian land . The Palestinian side rejected this and the talks broke down.

Palestine gained international recognition at the United Nations General assembly in November 2012 when it won a vote to become a non-member state.

Egypt and the US successfully co-brokered a ceasefire between Israel and Hamas in November 2012 following eight days of Israeli airstrikes on the Gaza Strip and rockets being fired from Gaza into Israel. However, early in April the Israeli air force carried out airstrikes on the Gaza Strip, claiming it had targeted “two extensive terror sites” in response to mortar fire from Gaza.