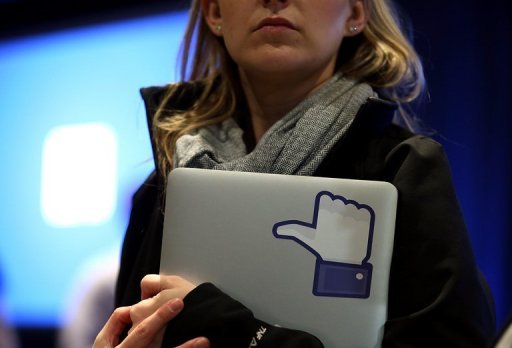 By Glenn Chapman (AFP) –  Facebook’s profit in the first quarter of this year climbed as it used its grip on people’s online social lives to challenge Google and Apple for revenue from mobile ads and apps.

Mobile advertising helped Facebook boost its first-quarter profit 58 percent from a year ago to $217 million, and to lift revenues past market forecasts, according to earnings results released Wednesday.

Facebook said its monthly active users rose 23 percent from a year ago to 1.11 billion, including 751 million who accessed the network on mobile devices.

Mobile ads accounted for 30 percent of advertising revenue for the quarter.

The profit was just below market forecasts, but revenues were better than expected, rising 38 percent from a year ago to $1.46 billion.

“We’ve made a lot of progress in the first few months of the year,” said Facebook chief executive and co-founder Mark Zuckerberg.

“We have seen strong growth and engagement across our community and launched several exciting products.”

Company highlights during the first three months of the year included the launch of “Facebook Home” software, which puts the social network center stage on Android-powered smartphones, and the launch of a set of new ad products.

Facebook’s share of the overall US online advertising market is expected to rise to 6.5 percent this year from 5.9 percent in 2012, according to industry tracker eMarketer.

The overall US digital ad market meanwhile grew 14.8 percent to $9.64 billion in the first quarter of this year, eMarketer reported.

Spending on advertising on mobile devices such as smartphones and tablets in the United States is expected to surge by more than $3 billion to $7.29 billion this year, with Facebook’s share growing to 13.2 percent, eMarketer said.

Facebook shares have been under pressure since its highly anticipated public offering a year ago.

The shares, which were offered last year at $38, lost 1.2 percent Wednesday to stand at $27.43 before showing modest movements in after-hours trades.

Facebook has proven again that it can target ads to smartphones and tablets, but questions remain regarding how effective those marketing messages are, according to Forrester analyst Nate Elliott.

Facebook hasn’t tapped the great money-making potential of using troves of data it gathers about members to help, for a fee, other websites target ads, Elliott argued.

“Facebook has access to a database of affinity; they know about people’s tastes and preferences,” he said.

“That data is very valuable and can help marketers, not just on Facebook but everywhere.”

A key question for Facebook looking ahead is whether its Home software suite for mobile phones will catch on after initially getting a lukewarm response.

The software weaves the social network into the homescreens of phones powered by the latest versions of Android to focus on “people and not apps.”

As of Wednesday, Google’s online Play shop indicated that Home had been downloaded fewer than 15,000 times since its US release on April 12 and its overall rating was two stars on a five-star scale.

A version should be available in Europe in the coming months.

“This is just the first release,” Zuckerberg said of Home during an earnings call with financial analysts.

“Over the next few months we hope to push this out much more broadly and get it in the hands of a lot more people.”

Facebook executives laid out a “roadmap” that includes improving the quality and targeting of ads shown to members connecting from smartphones or tablets.

The strategy includes using Facebook as a platform for the discovery and distribution of third-party apps like those on the virtual shelves of Apple’s App Store or Google Play.

“Facebook should be a place you can come to spread your apps, and that is showing real traction,” Zuckerberg said.

“Think how big an opportunity mobile apps can be for Facebook.”

Companies get paid fees by developers for installations of apps.

Facebook last week revealed that it was buying Parse, a startup specializing in powering mobile applications.

Parse provides software developers tools for building applications and handles behind-the-scenes tasks such as data storage and servers, regardless of which mobile devices are involved.