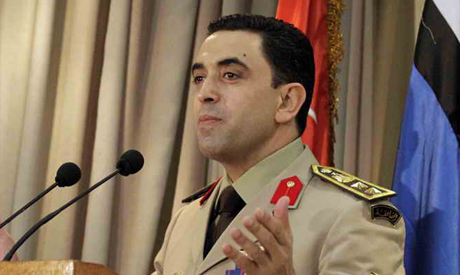 Military Spokesperson Ahmed Ali has said that there are no secret prisons or unannounced prisons being run by the military in any Egyptian city.

This came in an official statement which was published on the military spokesperson’s Facebook page and has came in response to claims by some news services that the military is running a prison called El-Serdab Prison located in the governorate of Suez.

News of the prison was published on Rasd News Network, Moheet Media Network and other news portals. The media reports surfaced after the wife of a missing officer claimed her husband was in that prison on television.

She had claimed that the prison was designed by the US and that 50 percent of its management was American and the other half was Egyptian, the media reports said.

Ali’s statement ran, “this information is not correct in form and substance and is not based on tangible facts. The publishing and circulation of some news services of these lies without support or evidence is considered a contribution to systematic campaigns that aim to distort the armed forces, damage it, and negatively impact the morale of its members.”

He called on anyone with information or evidence on these secret prisons to present them to the Ministry of Defense or the Military Spokesperson.

Finally, he called on media to ensure the accuracy of information before publishing it, “for the sake of the nation and its security.”

“Why is there this vast amount of lies, rumours, and slander targeting the armed forces and its troops daily?” he asked.