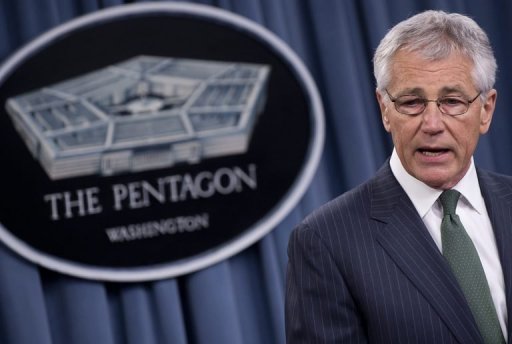 By Dan De Luce (AFP) – WASHINGTON — The United States said it was taking a fresh look at whether to arm Syria’s rebels as the Damascus regime pressed an assault on opposition forces in the embattled city of Homs.

Asked whether the US government was rethinking its opposition to arming the rebels, Hagel replied with a firm “Yes.”

But Hagel said no decision had been reached and declined to offer his own view on the matter, saying he was “in favour of exploring options and seeing what is the best option in coordination with our international partners.”

Asked about Hagel’s comments later, Obama said they represented the view he has expressed for “months.”

“As we’ve seen evidence of further bloodshed, potential use of chemical weapons inside of Syria, what I’ve said is that we’re going to look at all options,” the president told a press conference in Mexico.

But, Obama added, “we want to make sure that we look before we leap and that what we’re doing is actually helpful to the situation, as opposed to making it more deadly or more complex.”

Hagel’s predecessor, Leon Panetta, who stepped down in February, had told lawmakers that he and the US military’s top officer, General Martin Dempsey, had recommended arming the rebels but were overruled.

Speculation has mounted that the administration could reverse its opposition to arming the rebels after officials said last week that American spy agencies now believe the Syrian regime may have used chemical weapons on a small scale.

Hagel’s comments came at a joint press conference with his British counterpart Philip Hammond, who said Britain had not ruled out arming the rebels or other military options.

But Hammond said his government had to abide by a European Union ban on sending weapons to the opposition, adding that Britain would “look at the situation” when the ban expires in a few weeks.

Both men said their governments wanted to see a political solution to the two-year-old conflict, but the diplomatic effort appeared on the verge of another setback with signs that peace envoy Lakhdar Brahimi was poised to quit.

The permanent Security Council members — Britain, China, France, Russia and the United States — have all been urging Brahimi to stay in the post he took up in August after former UN leader Kofi Annan quit, diplomats said.

One UN diplomat said Brahimi had already decided to step down.

“The decision has been taken, but we don’t know when it will be formalised,” said the diplomat, speaking on condition of anonymity.

In Syria, President Bashar al-Assad’s forces appeared to be closing in on rebels holed up in a key area of the battered city of Homs, said the Syrian Observatory for Human Rights, a Britain-based watchdog.

“The Syrian army, supported by backup forces and expert officers from Iran and Hezbollah, has taken control of large parts of the Wadi al-Sayeh district” in Homs, the group said in a statement.

The neighbourhood is halfway between the Khaldiyeh district and the Old City, two rebel-held areas that have been besieged by the army for nearly a year.

Seizing Wadi al-Sayeh would enable the army to cut off links between the two areas and possibly trigger sectarian revenge attacks, said the group, which relies on activists and medics on the ground for its information.

The regime is led by Alawites, an offshoot of Shi’a Islam, while Syria’s population is majority Sunni, as are the rebels.

Obama has been reluctant to intervene in the war but faces mounting criticism that he has allowed the Assad regime to cross his own declared “red line” on using chemical weapons.

The US president said this week intelligence agencies were still trying to determine exactly who had fired chemical agents on the battlefield.

At the Pentagon, the British defence secretary said that the more time passes, the more difficult it will be to verify suspicions that Damascus unleashed chemical agents.

“I don’t think you need to be a technical expert to know that after any use of a chemical agent, there will be a degradation over time of the evidence that can be collected,” Hammond said.

Britain wants to obtain proof that would be acceptable in a court, as that would hopefully have “a deterrent effect,” and make clear the regime would be held accountable, he said.