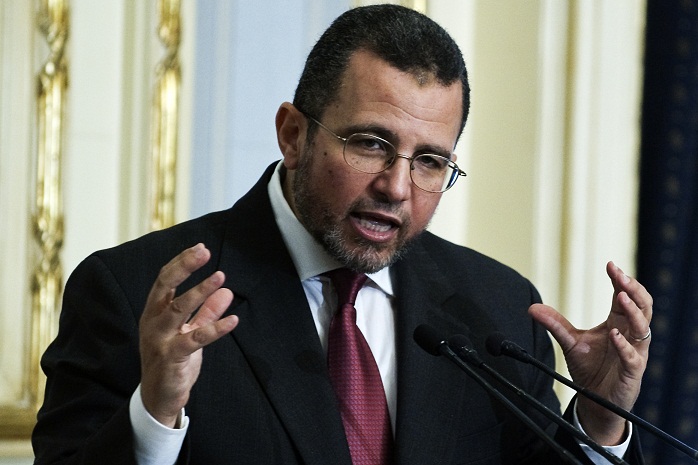 Prime Minister Hesham Qandil met Coptic Orthodox Pope Tawadros II at Saint Mark’s Cathedral to wish him and the Coptic Orthodox community a happy Easter on behalf of the government on Sunday.

Also present at the cathedral on Sunday was a military delegation representing Minister of Defence and armed forces Commander-in-Chief General Abdel Fatah Al-Sisi as well as several cabinet ministers and representatives of political parties.

Several representatives of the state and other dignitaries were also at the Cathedral on Saturday night for Easter liturgy including Minister of Higher Education Mostafa Mosaad, a Muslim Brotherhood member, who was representing Qandil and the government.

President Mohamed Morsi wished Tawadros a happy Easter over the phone and sent Minister of Housing Tarek Wafik as his representative. Tawadros thanked the state officials and other dignitaries attending the liturgy and those who sent representatives, to various degrees of applause from the audience.

Presidential and governmental representatives received almost no reaction, whereas Al-Azhar Grand Imam Ahmed Al-Tayeb received warm applause when Tawadros informed worshippers he had sent a telegram wishing them a happy Easter, as did Al-Sisi.

Omar Makram Mosque Imam Mazhar Shahin, who was present at the Cathedral, also received a lot of applause.

The pope told worshippers that the resurrection is the most important religious event of the year and that Jesus’ resurrection freed them from three deaths: death of the mind, death of the spirit, and the death of hope.