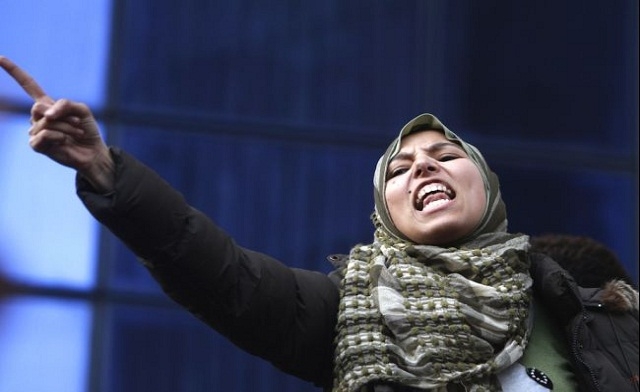 They also demanded an apology to activist and member of the Social Popular Alliance Party Yasmin Hossam El-Din. On 2 May, the party released a statement condemning an attempt discredit its members after two news agencies published a video of Hossam El-Din getting into overalls on 1 May in solidarity with workers during a march on Labour Day.

“Some news services decided to use this scene and to use sensationalism… They wrote that Hossam El-Din was changing her clothes on the streets… And this goes against what was captured on camera, which shows her wearing the overalls over her clothes.”

In a Sunday statement, Nazra for Feminist Studies, the Cairo Institute for Human Rights Studies, and El Nadeem Centre for Rehabilitation of Victims of violence as well as other rights groups denounced the “continued campaigns to defame female human rights defenders by the press and media to cast doubts on their integrity”.

Abeer Abo El’ela from the media office of the National Council for Women said she believes there is a deliberate targeting of women. “It is very clear,” she said. “The current general policy oppresses women… The plan is to make women stay at home.” Abo El’ela believes that the message behind the targeting is to tell women that if they try to be defenders their situation will be bad.

“We hold campaigns on the importance of female participation in politics but there is fear. Even if the women are not afraid, their father or brother is afraid for them,” she said.

The rights groups called on the public to not be misled by the lies or help spread and circulate them. They added that political parties and women’s organisations have to stand up to campaigns like these. Additionally, they demanded that the press and news services that ran the claims on Hossam El-Din formally apologise.

The seven organisations added that there is a need for legislation that protects female human rights defenders.