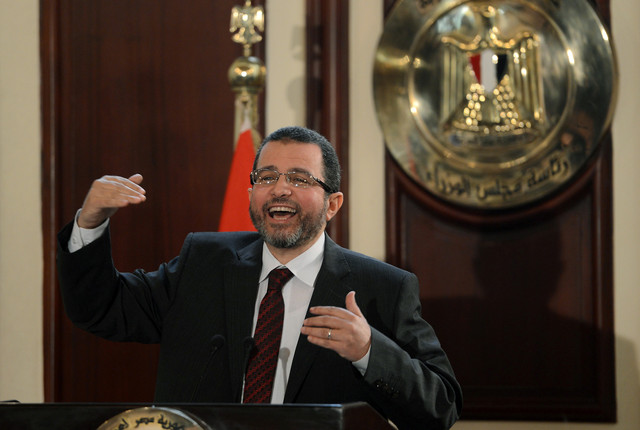 The details of the cabinet reshuffle are due to be released on Monday evening or Tuesday morning at most, said Prime Minister Hesham Qandil on Monday afternoon.

Qandil added that 11 ministers would be included in the reshuffle announced by the presidency approximately two weeks ago. At the time, President Mohamed Morsi said only that the changes would come “soon” and did not provide any details concerning the scope of the adjustments.

The president remained tight-lipped in an interview on Al Jazeera, saying that the “most efficient” candidates would be given posts in the reshuffled cabinet.

Qandil met with four of the potential new ministers earlier on Monday and was set to meet with some of the remaining seven later in the afternoon. The prime minister was also scheduled to meet with Morsi at the presidential palace to discuss the results of his meetings with the new ministers.

Groups including the Al-Nour Party and the National Salvation Front (NSF) have demanded that Morsi dismiss Qandil and his entire cabinet, replacing it with a more neutral one that would oversee upcoming elections for the House of Representatives. A complete cabinet change is one of the NSF’s preconditions to participate in parliamentary elections.

The Conscience Front, a group consisting of Islamists and some independent politicians, said some of the existing ministers were “incapable of introducing change,” specifically referring to the ministers of justice, information, interior, foreign affairs, petroleum, and investment.