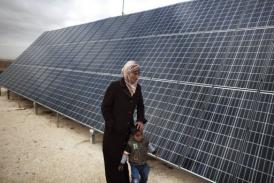 During a meeting held in the Egyptian embassy in Berlin the leaders of a number of Egyptian expatriate communities in Germany discussed the need to encourage the production of clean energy, particularly solar energy, suggesting a number of new development and service projects to be implemented throughout the country.

They further discussed the need to develop a long-term plan for development in Egypt, in addition to identifying specific problems facing the country and coming up with new, transparent ways to address them by using available means.

Much of the discussion focused around the need to attract tourism, in addition to establishing a joint Egyptian-German school or academy in Berlin.

Egyptian ambassador to Germany Mohamed Hegazy said that he would be meeting with state representatives from Berlin over the next week to help aid in establishing an Egyptian-German school. He further promised that he would forward all of the community’s suggestions, comments and concerns to the Egyptian government.

The meeting came as part of a campaign to promote the Egyptian embassy as “an extended household” for Egyptian expats living in Berlin, as a place to discuss the concerns and problems facing the community. The meeting looked to build on progress made during President Mohamed Morsi’s recent visit to Germany, during which time he pledged to foster stronger links between Egyptians living abroad and their home country.

“Since President Morsi’s recent trip to Germany we have seen a genuine desire on the part of the Egyptian expat community to use their skills and experience to aid in the improvement of their home country and address the various challenges faced by Egypt and its government,” said Hegazy.

He added that the Egyptian expat community in Germany served as the bridge connecting the two countries, pointing to the recent increase in bilateral relations on both the presidential, ministerial and parliamentary level.

The achievements of President Morsi’s 30 January trip to Germany were also discussed during the meeting. Among them included the signing of a memorandum of understanding regarding the establishment of a joint Egyptian-German economics committee. Cooperative efforts between Egypt’s New and Renewable Energy Authority and Desertec were also discussed, particularly with regards to the production of solar energy, in addition to memorandums of understanding regarding the creation of more job opportunities for Egyptian youth.

Hegazy also discussed German plans to provide Egypt with €353m in development funding as part of the two countries’ 2013 economic development initiative. Germany’s government also recently set aside €100m as part of a democracy promotion initiative for Arab Spring countries, €40m of which would go to Egypt.

Those in attendance agreed to host periodic follow up meetings, in addition to a series of forums to discuss fields of joint economic cooperation, all under the supervision of the embassy. The meetings and events will be held in a number of cities located throughout Germany,

The meeting, which was attended by 40 expats representing 17 separate organisations, came as part of an attempt to increase contact and cooperation between the Egyptian embassy and the country’s expat community living in Germany.

Those in attendance, in addition to a number of high profile personalities, including President of the Berlin Islamic Centre Sheikh Khodeir Abdel Mu’ti, all took part in an Easter feast hosted by the Berlin Coptic Church.

Hegazy read a letter by Morsi addressed to Coptic Egyptians in Germany and abroad, in which he called for increased cooperation between Christians and Muslims to work together in the various civil society organisations hosted by the Egyptian embassy in Berlin.