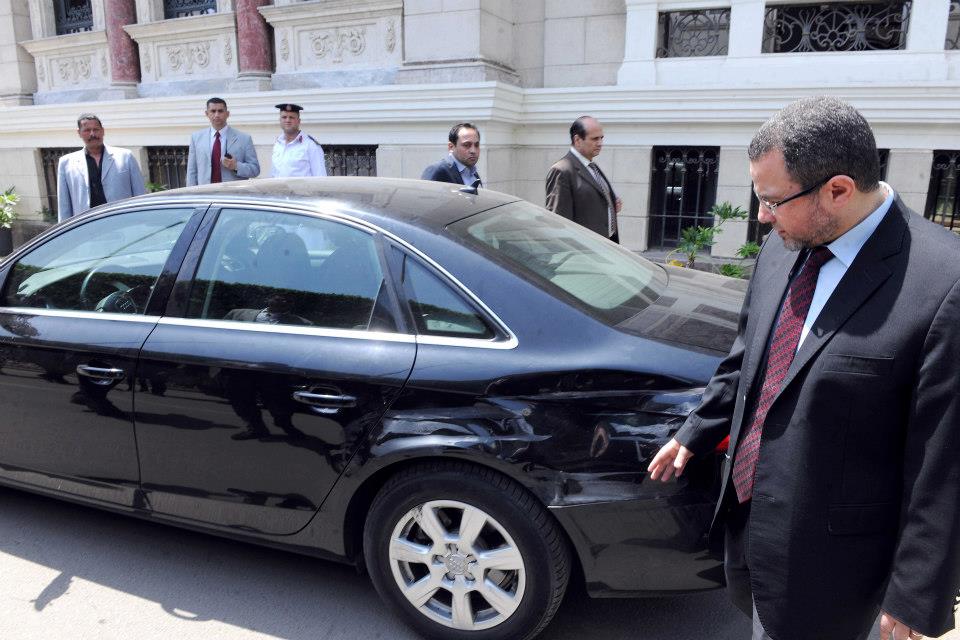 A small pickup truck infiltrated the motorcade as it passed over a bridge in Dokki as Qandil was on his way home from work.

Qandil’s bodyguards tried to move the truck away. As the assailants tried to flee the scene, they fatally injured a street vendor called Taha Sayed and injured a police man Nabil Al-Sawy and another citizen, Adel Ismail.

Qandil told reporters on Monday that the rights of those who were killed or injured will be brought to them. He paid a surprise trip to the injured in hospital. The injury and fatality happened while the assailants were trying to flee the scene with their speeding car.

“A police force from the Giza Directorate chased the shooters down, arrested them and confiscated the guns they used,” the statement read. According to the statement, the men were caught and arrested in Al-Nahda Square, near Giza Zoo.

The statement claimed that the incident was not political. The assailants were carrying weapons because they were going to a fight in Old Cairo.

The assailants were engaged in a fight on Saturday and set out on Sunday to reignite the clashes. They thought they were being chased when they fired birdshot in the air, according to a statement by the General Prosecution.

Al-Hadidy said that this was not an attempt to assassinate the prime minister.

They were charged with possession of unlicenced weapons, resisting arrest, violence, and attempted murder.

The General Prosecutor ordered an investigation into the incident to be supervised by Ayman Al-Bably, Attorney-General for the North Giza Prosecution Attorney, and chief prosecutor for Dokki, Sherif Tawfik.

National Salvation Front Leader and Political Science Professor Amr Hamzawy condemned the attack. “No to violence against the people I disagree with politically… it’s completely rejected and condemned.”