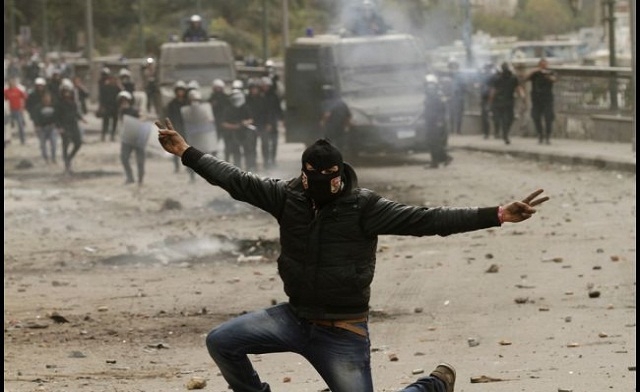 The court ordered on Tuesday the release of 10 people arrested on Friday during clashes near the High Court, including a minor and a woman, but the prosecution appealed the decision.

The detainees will remain in custody until the prosecution’s appeal is heard. They are accused of belonging to a banned group, the Black Bloc and the possession of weapons, among other charges. Mahmoud Al-Qady, a friend of some of the detainees, said they were sitting at a local coffee shop wearing black clothes when they were arrested.

Ahmed Atef, from the Front to Defend Egypt’s Protesters said the detainees were picked up randomly. “Anyone on the streets in the vicinity of clashes can be detained,” he said.

On Saturday, the prosecution ordered them to be detained for 15 days. Their lawyers appealed the detention order in court and on Tuesday, the court accepted the appeal and decided to release 10 of the detainees on bail of EGP 2,000. The minor was to be released to his parents and the court rejected the appeal to release the final detainee. “No one knows why,” Al-Qady said.

The prosecution appealed the court’s decision and the appeal will be heard in court on Thursday.

Since April, at least 20 people have been charged with belonging to the Black Bloc group. Prosecutor General Tala’at Abdallah summoned 22 people in April for involvement in the group, but only eight were brought in.

Six protesters showing solidarity with those eight were also arrested and sentenced to five and a half years in prison.  The Arab Network for Human Rights Information denounced on Sunday the harsh prison sentences issued to the six protesters.