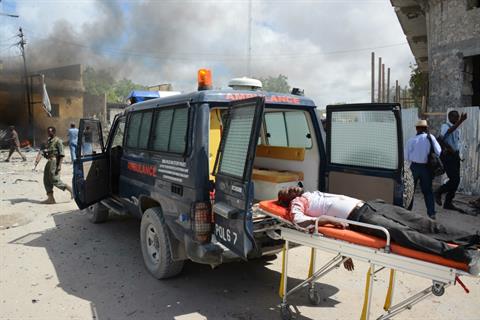 (AFP) – Qatar has strongly condemned an Al-Qaeda-linked suicide attack that targeted its officials in Somalia’s capital, in a statement on the official QNA news agency.

About 11 people were killed Sunday in Mogadishu when a suicide attacker from the Al-Qaeda-linked Shebab insurgents rammed a car laden with explosives into a convoy carrying four Qatari officials, police said.

The officials were travelling in armoured vehicles belonging to the interior ministry when the convoy was attacked, but were unharmed.

“Qatar strongly condemns the… ugly explosion… in the Somali capital,” the Gulf state’s foreign ministry said in a statement published by QNA late on Sunday.

Qatar “condemns all acts of violence everywhere and backs the Somali government’s attempts to achieve peace, security and stability on its soil.

“Differences in opinions and beliefs cannot excuse such operations and terrorist attacks,” it said, urging the “international community to support the Somali government”.

The attack came ahead of a conference in London on Tuesday to draw up plans to boost security and increase development in conflict-torn Somalia.

More than 50 countries and organisations are due to take part in the talks, co-hosted by Somali President Hassan Sheikh Mohamud and British Prime Minister David Cameron.

Sunday’s blast was the latest in a string of bloody attacks in the seaside capital, where Shebab insurgents have vowed to topple the government and have set off bombs and launched guerrilla-style strikes.

Last month, the Shebab launched a show of force in a complex coordinated attack, killing at least 34 as suicide commandos stormed the main courthouse while a car bomb was set off elsewhere in Mogadishu.

While riven by infighting and hunted by US drones, the extremists remain a potent threat, launching car bombs and assassinations, and are still powerful in rural areas as well as reportedly infiltrating the security forces.