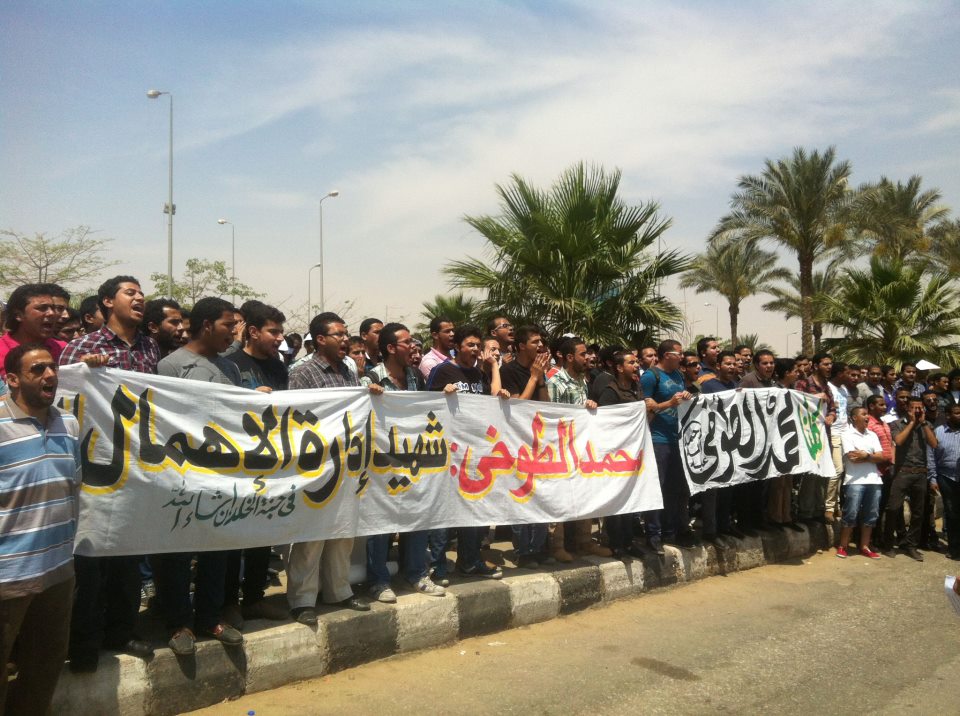 An open-ended sit-in organised by students began on Tuesday outside the El Shorouk Academy in Cairo. Roughly 500 students presented seven demands in response to the death of a student due to negligence at the hands of academy doctors.

The protesting students also called on the academy to equip the clinic with additional medical equipment to be able to handle a wider variety of medical emergencies.

Mohamed Mamdouh El-Toukhi, a first year engineering student, died on 2 May after academy doctors misdiagnosed him. El-Toukhi is said to have suffered from a low platelet count, clear cells in your blood that form blood clots.

A low platelet count can lead to profuse bleeding because the wound does not clot.

Another demand presented by the students is the inclusion of an ambulance service, as stated in the academy charter, and renaming the largest lecture hall in the Faculty of Engineering after Mohamed El-Toukhi “so that his memory can remain immortalised”.

Mohamed Fathy, one of the organisers of the sit-in, said the students were barred from entering the academy but the protest remained peaceful. “We want to go inside so that we can voice our concerns and demands to the administration,” he said. At the time of writing the administration had not responded to the students’ demands.

In response to El-Toukhi’s death, the minister of higher education ordered the formation of an investigative commission. This commission, according to an official statement from the Ministry of Higher Education on Saturday, is comprised of Jamil Abdul Baqi, the dean of Ain Shams’ Faculty of Law; Yasser Fouad Abdel Moneim, forensics professor from Ain Shams’ Faculty of Medicine; and Ahmad Mohamed Farhat, head of the education sector in the ministry.

The committee will submit its report to Higher Education Minister Mustafa Mosaad.

Fathy said he was pessimistic regarding the committees’ findings, adding that he does not think the findings will lead to any concrete change or action.

Students across Egypt have been protesting various incidents of negligence, corruption and violence at universities. Last month hundreds of Al-Azhar University students suffered from food poisoning in two separate incidents. A student also died in an unrelated incident after Al-Azhar University doctors failed to properly treat his illness, prompting protests at the university.