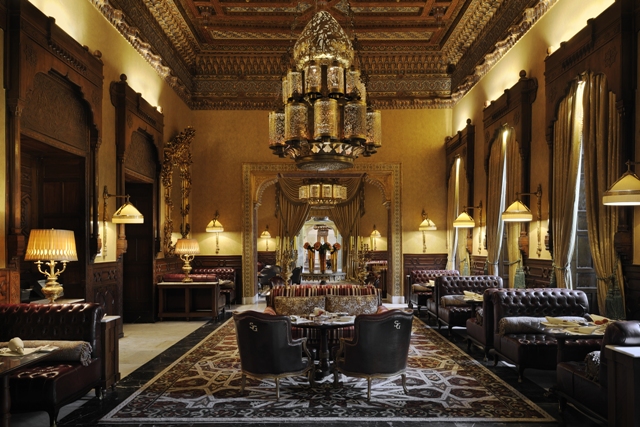 There are many aspects which contribute to a pleasant dining experience; elegant décor, a friendly atmosphere, professional service, the right combination of quality versus quantity, and most important of all, flavour and presentation.

Dining at the Zamalek Marriot’s Saraya restaurant was an experience which combined all these aspects exquisitely, at a cost, for those looking to celebrate a special occasion. As I entered Saraya I immediately noticed the décor; high ceilings and elaborate chandeliers, wonderfully crafted and a ceiling carved with geometric shapes.

The tables are spacious and comfortable, allowing for a high level of relaxation while waiting for your meal. The excellent service we received, being polite, attentive and expansive, was not limited to my partner and I, making the experience far more genuine. It is one thing to be served well when they expect you, but it is quite another for it to be the norm across the establishment.

Our waiter, whose name was Mohamed, explained the menu to us in detail and without hesitation. Originally a French restaurant, Mohamed explained Saraya has transformed itself into an Italian steakhouse restaurant which still offers some French cuisine.

As a starter, my partner ordered the Midtown grilled onion soup and I chose the insalata caprese. Both dishes were prepared and presented within 10 to 15 minutes.

The onion soup was very flavoursome. The soup itself was covered in a sizeable layer of bread and melted cheese, making it quite filling and certainly worth the wait. The salad was a nice juxtaposition to the soup: light, refreshing and without an overpowering aftertaste.

As a main course my partner ordered the herb-crusted rack of lamb which, we were told, is Italian. I had the 10 oz New York prime Black Angus steak with a side of rice and spinach.

The lamb, ordered medium rare, was slightly undercooked but nevertheless delectable: soft and succulent and beautifully presented.  It was accompanied by a mushroom sauce and lay on a bed of fried vegetables. The sauce was not bad, but was overpowering. It detracted from the herbs already crusting the lamb but thankfully was served in a separate container to accommodate personal preference.

The steak was, sadly, not as beautifully presented as the lamb, but was nonetheless delicious and it was cut, cooked and seasoned properly. The meat was spot-on and left me, a self-professed meat enthusiast, utterly satisfied. The pepper sauce accompanying the meat was somewhat overbearing, but was also served separately.

For dessert we ordered the chocolate croquant, one of the few French things left on the menu. “The croquant is made of three types of chocolate and a caramel base,” Mohamed told us, recommending it as the house speciality.

The croquant was OK, but it was not on par with the rest of our meal. The chocolate was very mild, the croquant very soft, and the combination of three types of chocolate with a caramel base and a slice or two of strawberries sounds delicious but failed to excite. It was not as good as we had come to expect.

Aside from the slightly undercooked lamb and an underwhelming desert, the Saraya experience was perfect. The chefs, I am told, are Egyptians who have lived in the United States and in Italy for at least a decade, training and working in kitchens during that time.

The ambience was set very well by live music, a woman playing the giant harp so beautifully that I found myself tapping along with the rhythm of the melody.

All in all, the Saraya is a five-star restaurant, which offers five-star service at five-star prices. Their food will lighten your wallet and tighten your belts, as an average three-course meal would set you back at least EGP 350. If you can afford fine dining, however, it does not get much finer than Saraya.