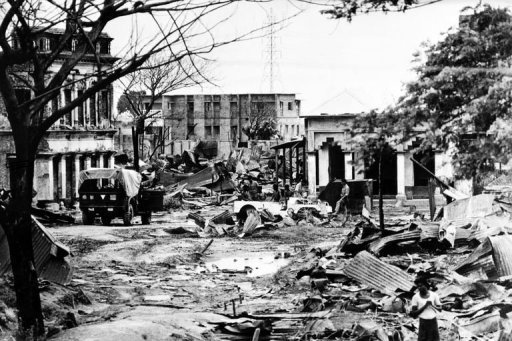 By Kamrul Hasan Khan (AFP) –  A war crimes court sentenced a top Bangladeshi Islamist to death on Thursday for masterminding the slaughter of at least 120 farmers in one of the bloodiest single episodes of the 1971 independence war.

In a ruling likely to further fuel tensions between the secular government and religious hardliners, a special tribunal found Mohammad Kamaruzzaman guilty of genocide, torture, abduction and crimes against humanity.

“He is be hanged by the neck till death,” presiding judge Obaidul Hassan told a packed courtroom in the capital Dhaka.

The 61-year-old Kamaruzzaman, who is the assistant secretary general of the opposition Jamaat-e-Islami party, was the fourth person to be convicted by the much-criticised International Crimes Tribunal and the third senior politician.

As the verdict was announced, he could be heard condemning it as the “wrong judgement” from his seat in the dock.

Hundreds of secular protesters who had gathered at a central Dhaka intersection for news of the verdict greeted the announcement with loud cheers.

“Because of his heinous role, many people were murdered and many women were raped,” Attorney General Mahbubey Alam told AFP outside the courthouse.

“The nation has got justice today.”

Prosecutors said Kamaruzzaman was a “chief organiser” of Al Badr, a notorious pro-Pakistani militia accused of killing thousands of people in the nine-month war which saw what was then East Pakistan split from the regime in Islamabad.

The genocide charge against Kamaruzzaman stems from the slaughter of at least 120 unarmed Bangladeshi farmers in the remote northern village of Sohagpur which has since become known as the “Village of the Widows”.

Three of the widows testified against Kamaruzzaman during his trial, in which the prosecution detailed how he led Pakistani government troops to the village.

The soldiers then marched the farmers to paddy fields, forced them to stand in a line and proceeded to gun them down en masse.

Mohammad Jalal Uddin, a farmer who lost seven members of his extended family in the killing, was delighted at the verdict.

“I lost my father, uncle and other relatives. Their crimes were that they took part in training to join the freedom fight. They were also accused of concealing freedom fighters,” said Uddin who was a student at the time.

“My mother and aunt died without getting justice, but at least I’ve seen justice,” Uddin, who heads the village’s welfare society for widows, told AFP by phone. “We still have 37 widows in the village.”

Defence lawyers rejected the charges as baseless, saying the chances to prove their client innocent were severely curtailed as the court only allowed five witnesses to testify for Kamaruzzaman.

Previous verdicts from the tribunal have sparked widespread violence on the streets of a country which has a 90 percent Muslim population.

The latest verdict came only days after the deaths of at least 38 people in clashes between the security forces and Islamists who are demanding a new blasphemy law.

The secular government led by Prime Minister Sheikh Hasina has insisted that it will not bow to the demands of the hardliners.

Around 150 people have now been killed since the first verdict against an Islamic TV preacher was sentenced to death on January 21.

The main opposition Bangladesh Nationalist Party (BNP) and its Islamist allies have said the war crimes court is a political tool for the ruling Awami League government to target its opponents.

Two BNP officials and eight other Jamaat officials including its chief and deputy are still on trial for war crimes. A verdict against Ghulam Azam, the wartime head of Jamaat, is expected later this month.

Unlike other war crime courts across the world, the Bangladesh tribunal is not endorsed by the United Nations. The New York-based Human Rights Watch group has said its procedures fall short of international judicial standards.

The government says the trials are needed to heal the wounds of the 1971 war in which it says three million people were killed and 200,000 women raped. Independent estimates put the death toll between 300,000 and 500,000.