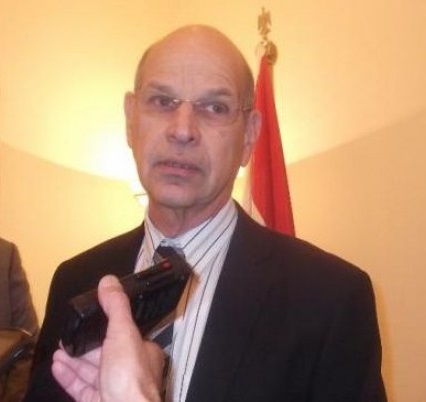 The Ministry of Foreign Affairs has summoned Israel’s ambassador to Egypt, Yaakov Amitai, to discuss allegations surrounding the mistreatment of staff members from Egypt’s embassy in Israel, the state-owned news agency reported on Wednesday evening. Amitai was also summoned to hear Egypt’s condemnation of recent Israeli airstrikes in Syria and the arrest of the Grand Mufti of Jerusalem.

Minister of Foreign Affairs spokesperson Amr Roshdy reportedly told Amitai Egypt would provide a “strongly worded protest” for the ill-treatment of its staff, according to AFP.

Roshdy also said the airstrikes which took place last week were a breach of Syria’s sovereignty.

Roshdy also condemned the arrest of the Grand Mufti of Jerusalem, Sheikh Mohamed Ahmed Hussein, who was taken from his home by Israeli authorities on Wednesday. Hussein was briefly detained for interrogation regarding the recent incidents of violence near Al-Aqsa Mosque, a hotly contested and highly important religious site in Judaism and Islam.

Israeli media outlets reported the Grand Mufti is being investigated under allegations that he incited violence between Jewish pilgrims and Muslims.

The US state department urged all parties to remain calm and work towards restarting peace talks in a press briefing on Wednesday. The statement came after Israel received widespread condemnation from several Muslim states, including Egypt, regarding the Mufti’s arrest and the recent airstrikes in Syria. A complaint made by the Organisation of Islamic Cooperation called for the United Nations to condemn Israeli actions.

Al-Aqsa stands atop the Temple Mount, near the Dome of the Rock. Al-Aqsa and the Dome are controversial sites in Jerusalem because they are important Jewish and Muslim heritage sites under Islamic supervision. The Israeli government enforces a ban on worship by Jews on the Temple Mount but allows Muslims to worship there, sparking protest from some Jewish rabbis and worshippers.

Israeli authorities often stop Palestinians and other Muslims from going to the Temple Mount for security reasons. As a result of the heightened tensions between Israelis and Muslim worshippers in the area, violence often breaks out and soldiers sometimes storm the holy sites.