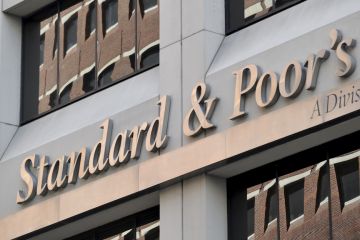 Egypt’s long-term rating was lowered to ‘CCC+’ from ‘B-‘, while its short-term rating dropped to ‘C’ from ‘B’, the agency said in a statement.

“The downgrade reflects our view that the Egyptian authorities have yet to put forward — either to the Egyptian population or the international donor community — a sustainable medium-term strategy to manage the country’s fiscal and external financing needs,” it said.

“The likelihood of the Egyptian authorities meeting their fiscal targets, easing external pressures, and strengthening the social contract has deteriorated,” Standard and Poor’s said.

Egypt’s economy has been battered by political turmoil and unrest since the 2011 uprising that toppled Hosni Mubarak.

Islamist President Mohamed Morsi, who was elected in June, has vowed to pull the country out of economic crisis, but his tenure has been marked by political polarisation and repeated violence and unrest.

Talks with the International Monetary Fund on a crucial $4.8-billion financing programme have bogged down, with the global crisis lender saying Cairo must show its commitment to a broader reform plan.

Standard and Poor’s said it expects “financing pressures to remain elevated and comprehensive donor support, including from the International Monetary Fund (IMF), to remain elusive.”

But it said the willingness of donors to provide “ad hoc funding to avert an external financing crisis” meant the outlook was stable.

Foreign currency reserves have risen by $1 billion to $14.42 billion, the Central Bank said on Wednesday, although that remains short of what authorities say is a “critical minimum” of $15 billion.

Reserves stood at $36 billion before the 2011 uprising.

“We believe Egypt’s foreign currency reserves could be further depleted should downward pressure on the exchange rate increase as a result of the ongoing political turmoil, expected double-digit inflation, or persistently large trade deficits,” the agency said.

It said it could raise the ratings “if Egypt’s political transition strengthens the social contract and a sustained increase in net international reserves provides evidence of an easing in external pressures.”