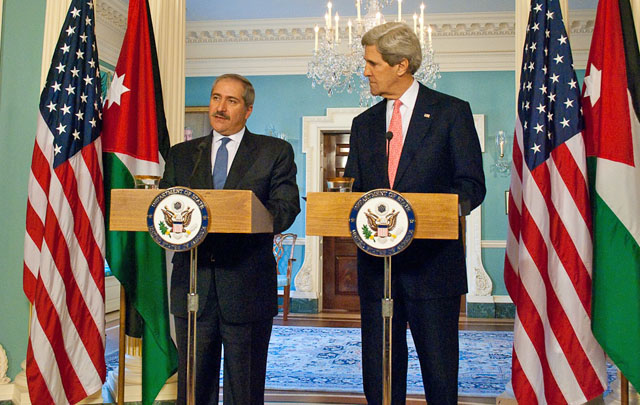 AFP –  US Secretary of State John Kerry insisted Thursday Syrian President Bashar al-Assad will have to step down as part of any political solution in Syria, as he held a third day of talks on the bloody conflict.

Speaking as he met Jordanian Foreign Minister Nasser Judeh, Kerry said all sides were working to “effect a transition government by mutual consent of both sides, which clearly means that in our judgement President Assad will not be a component of that transitional government.”

Kerry also officially unveiled $100 million (76 million euros) in additional US humanitarian aid for Syrian refugees, almost half of which will go to help Jordan struggling to cope with a tide of people fleeing the 26-month war.

Some 2,000 people are flooding across the border into Jordan every day, and the country now hosts some 525,000 refugees, Judeh said at the start of the talks in Rome.

“We have 10 percent of our population today, in the form of Syrian refugees. It is expected to rise to about 20 to 25 percent given the current rates by the end of this year, and possibly to about 40 percent by the middle of 2014,” he said.

“No country can cope with the numbers as huge as the numbers I’ve just described,” he warned, adding Jordan was very grateful for the help of the international community.

Plans for an international conference to try to find a solution to the crisis were also continuing, Kerry said, after he agreed in talks in Moscow that he and Russian Foreign Minister Sergei Lavrov would work in tandem on the issue.

He had spoken with most of the foreign ministers from the countries involved and there is a “very positive response and a very strong desire to move to this conference and to try to find, at least exhaust the possibilities of finding, a political way forward.”

UN chief Ban Ki-moon had also been in touch, so “we are going to forge ahead very, very directly to work with all of the parties to bring that conference together,” Kerry added.

It is hoped the conference, aimed at finding a path towards a transitional government in Syria, could be held by the end of May. Although no venue has yet been identified, Geneva could host the talks.

US ambassador to Syria, Robert Ford, has meanwhile also met with the Syrian opposition in Istanbul on Wednesday to discuss the way forward, Kerry said.

Since the war erupted to oust Assad, more than 1.5 million Syrians have fled the country into neighbouring nations, including Turkey, Jordan and Lebanon, vastly straining their resources.

Up to four million more could be displaced within the country as they seek to flee the fierce fighting, which has already claimed some 70,000 lives.