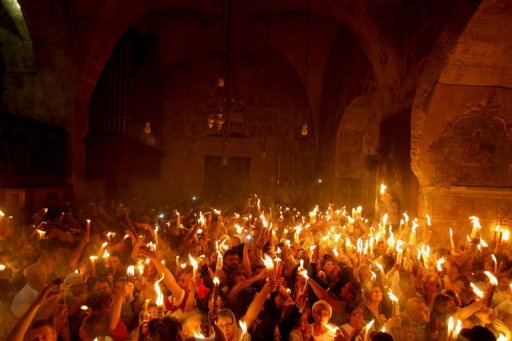 “I presented on our behalf a formal apology during a meeting with an Egyptian diplomat because in incidents like this it is good to lower the flames,” Deputy Foreign Minister Zeev Elkin told public radio.

Last Saturday, according to public radio, three Egyptian diplomats and a Coptic priest were hit by Israeli police during the Holy Fire ceremony, a centuries-old sacred rite which takes place in the church on the night of Orthodox Easter.

Footage posted on the Internet show a group of police manhandling a Coptic priest in Jerusalem’s Old City, with one officer locking the priest’s head in his arm.

A police spokeswoman told AFP they were aware of the reports and investigating.

Egypt on Wednesday summoned the Israeli ambassador in Cairo to protest over the “ill-treatment” of its diplomats, without giving details.

It was the second such diplomatic incident sparked by Israeli police this week.

On Wednesday, Jordanian officials also summoned the Israeli ambassador to protest after police detained the Jerusalem mufti, a top Islamic cleric, for six hours in connection with a violent incident against Jews at Al-Aqsa mosque plaza a day earlier.

Israel refused to comment on the incident, but Elkin described it as “unfortunate.”

“This detention was perfectly justified after a provocative sermon he delivered the day before and could have brought to a conflagration on the Temple Mount,” he said, using the Israeli term for the sprawling plaza in the heart of Jerusalem’s Old City.

The compound, which sits above the Western Wall plaza, houses the Dome of the Rock and Al-Aqsa mosques and is Islam’s third holiest site.

It is also Judaism’s most holy place.