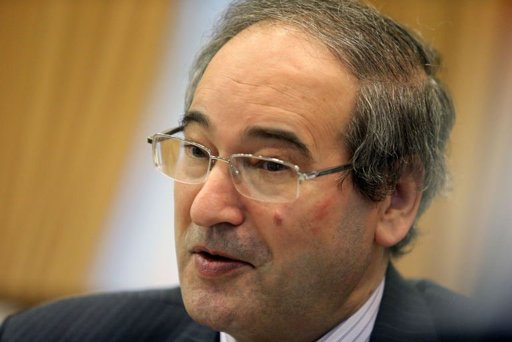 AFP – Syria has threatened an immediate response to any new Israeli strike, as its militant ally Hezbollah said Damascus would provide “game-changing” weapons despite two reported attacks on military sites.

Damascus also welcomed a US-Russian initiative to find a political solution to end the two-year-old civil war, while balking at Washington’s demand that President Bashar al-Assad would need to stand down.

The Assad regime also said it was ready to receive a UN team to probe claims that chemical weapons had been used in the country.

In an exclusive interview with AFP on Thursday, Deputy Foreign Minister Faisal Muqdad said “the instruction has been made to respond immediately to any new Israeli attack without (additional) instruction from any higher leadership, and our retaliation will be strong and will be painful against Israel.”

In Beirut, Hezbollah chief Hassan Nasrallah said Syria would supply his movement with “game-changing weapons” and open up the front to “resistance fighters” against the Jewish state on the Golan Heights.

Israel captured the Golan from Syria in the 1967 Six-Day war and subsequently annexed it.

Israel has repeatedly warned that it will intervene to prevent the transfer of advanced weaponry to Hezbollah, with which it fought a devastating 2006 war.

Hezbollah is battling alongside Assad’s troops in several parts of the country.

The regime is relying increasingly on its alliance with Hezbollah, and Lebanese newspaper Al-Akhbar quoted Assad as saying that Syria would “give Hezbollah everything” for its loyalty.

The military and the Syrian Observatory for Human Rights watchdog group both reported that loyalist forces, including Hezbollah elements, had advanced in the Qusayr area, strategically located along the Lebanese border.

An army officer told AFP the military seized control of Shumariyeh village near Qusayr “and troops are currently on their way to the village of Ghassaniyeh,” which has been under rebel control for more than a year.

Meanwhile, Syria’s foreign ministry welcomed the US-Russian “rapprochement,” under which the two countries will seek to convene an international conference to build on a six-point accord agreed in Geneva last year.

The Geneva agreement aimed at finding a path towards a transitional government but made no mention of Assad’s departure, which the opposition says is non-negotiable.

US Secretary John Kerry said Assad would have to step down as part of the resolution to the conflict.

That was rejected by the Syrian foreign ministry, which stressed that the decision belongs “only” to the Syrian people.

And the ministry said it was “confident that the Russian position, which is based on the principles of the UN Charter and international law, will not change.”

Russia is a top ally of the regime in Damascus and has staunchly resisted any bid to oust Assad.

The Obama administration is treading cautiously on Syria, and the reports of chemical weapons use, after what it sees as Washington’s past errors in the Iraq invasion and occupation, Vice President Joe Biden said.

Biden told Rolling Stone magazine that “we don’t want to blow it like the last administration did in Iraq, saying ‘weapons of mass destruction.'”

Iraq’s alleged weapons of mass destruction, cited by George W. Bush’s administration as the main motive to launch the US-led invasion in 2003, never surfaced after the fall of Saddam Hussein’s regime.

Biden stressed that once the use of the chemical weapons has been verified, Obama would likely make a “proportional response in terms of meaningful action,” without providing further details.

The United Nations said its Syria envoy, Lakhdar Brahimi, has withdrawn a threat to quit and will stay the course in light of the US-Russian agreement.

And The Wall Street Journal reported that Israel had informed Washington about the imminent sale to Syria of Russian S-300 missile batteries, advanced ground-to-air weapons that can take out aircraft or guided missiles.

Reacting to the report, Kerry warned in Rome that the sale would be “potentially destabilising” for the region.

Moscow has continued to supply Damascus with weapons throughout the conflict, which has left more than 70,000 people dead since March 2011.

Under mounting international pressure over the possible use of chemical weapons, Syria said it was ready to receive a UN team to investigate the claims.

“We were ready and we are always ready, right now, to receive the delegation that was set up by Ban Ki-moon to investigate what happened in Khan al-Assal,” Muqdad said, referring to a village near Aleppo where authorities say rebels used chemical weapons, killing 30 people.

He added that the use of chemical weapons was a “red line for President Assad.”