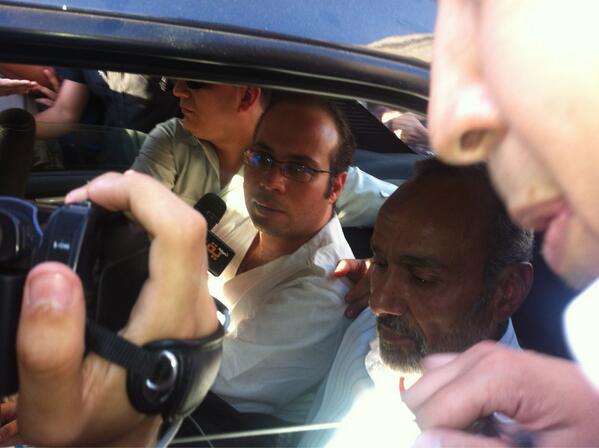 Members of the 6 April Youth Movement gathered outside the high court in central Cairo on Saturday afternoon demonstrating for the release of detained activists.

Around 100 people stood on the steps outside the entrance to the Prosecutor General’s office and called out the names of detainees such as Ahmed Doma, Abdelrahman Mohsen, Youseff “Joseph El-Ostura” Ali, Hassan Mustafa and Omar Emad. Each name was followed by a cry of “Freedom” from the demonstrators.

The movement organised this demonstration earlier in the week and insisted on going ahead despite the arrest of cofounder and coordinator of the group Ahmed Maher on Friday night at Cairo airport.

Maher was charged regarding his involvement with organising a protest outside Minister of Interior Mohamed Ibrahim’s house at the end of March, during which members of the movement threw ladies’ undergarments at the house. At the time police arrested four men in connection with the demonstration and Maher will now be investigated alongside them.

Maher was present outside the court in a car marked with the 6 April symbol.

The spokesperson for the group, Khaled El-Masry, stressed earlier on Saturday that the protest was unrelated to Maher’s arrest and intended to call for the release of all detained activists.