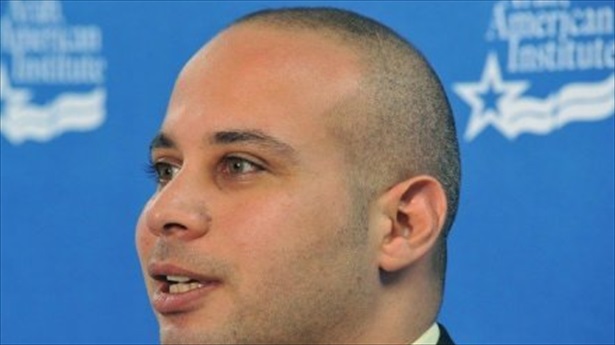 Cofounder and coordinator of the 6 April Youth Movement Ahmed Maher was released by prosecutors on Saturday after he was arrested at Cairo International Airport, returning from a visit to the United States.

Despite his release, Maher is still being investigated alongside four others for their involvement in throwing ladies’ underwear at the interior minister’s home.

Khaled El-Masry, media spokesman for 6 April, confirmed that Maher was released on Saturday morning having spent a night in Al-Aqrab maximum-security prison.  El-Masry reported that Maher had been jailed for four pending investigation. 6 April’s lawyers appealed the decision, claiming it was illegal and demanding the prosecution release him.

Maher was charged by the prosecution for his role in organising and taking part in a protest outside Minister of Interior Mohamed Ibrahim’s house at the end of March, during which members of the movement threw ladies’ underdarments at the house. At the time police arrested four men in connection with the demonstration.

El-Masry added that the prosecution would continue its investigation into Maher and has incorporated it into the investigation into the four other men, who were released last week having spent a month in jail, the majority of which was at Al-Aqrab prison.

Maher travelled to the US to take part in a conference in Washington DC, hosted by the New America Foundation. He participated in a panel discussing Egypt’s democratic transition last week.

El-Masry asserted that the youth movement will continue with a planned protest outside the High Court building on Saturday, in solidarity with a number of detainees including Ahmed Doma, Abdelrahman Mohsen, Youseff “Joseph El-Ostura” Ali, Hassan Mustafa and Omar Emad. El-Masry stressed the protest is not just for Maher, but for all political detainees currently being held. He added that protests will take place in other governorates as well, including Damietta, Assiut, Alexandria and Port Said.

The Al-Dostour Party announced on Saturday that it would also be at the High Court building to condemn Maher’s arrest. Media spokesperson for the Freedom and Justice Party (FJP) Murad Aly said that even if they disagree with some of the actions of the youth movement, the FJP condemns Maher’s arrest. The Salafi Reform and Renaissance Party expressed a similar sentiment, condemning the way in which Maher was arrested, regardless of the party’s opinions of him and the 6 April Youth Movement.