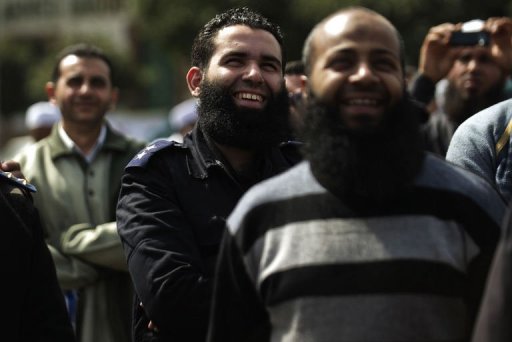 The Al-Da’wa Al-Salafia demanded on Friday the dismissal of Minister of Interior Mohamed Ibrahim following his refusal to allow bearded policemen to return to their jobs.

Abdel Moneim El Shahhat, spokesperson for the Al-Da’wa Al-Salafia, called for the dismissal of the minister of interior: “The minister of interior announced that jail is better for him than granting the bearded policemen their jobs back. However, we are not calling for his imprisonment since there is better choice called ‘resignation’,”

During an interview aired on the CBC TV channel a few days ago, Ibrahim said he would rather go to prison than allow any bearded officer to return to work. He explained that the verdict issued by the Supreme Administrative Court on 20 February did not tackle the issue of growing beards, adding that this is forbidden under police regulations.

Ibrahim further explained that police officers should all look the same and should not display any political or religious affiliations. “They knew the regulations before they joined the police academy and if they violate them now, they face suspension,” said Ibrahim.

Galal Morra, secretary general of the Al-Nour Party, said Al-Nour supports the demands of the suspended officers, claiming that they have a legal right to return to work. He said that Al-Nour does not want Ibrahim to resign.

Morra also denied that Al-Nour had met with officials at the ministry to discuss the police officers’ situation.

The Salafi Reform and Renaissance Party accused other Islamist political parties of ignoring security needs in favour of focusing on the bearded police officers’ situation. In a press release issued on Saturday, the party called on Ibrahim to focus on securing Egyptians and their property, instead of distracting the public with issues that should be solved “at his office”, according to the statement.